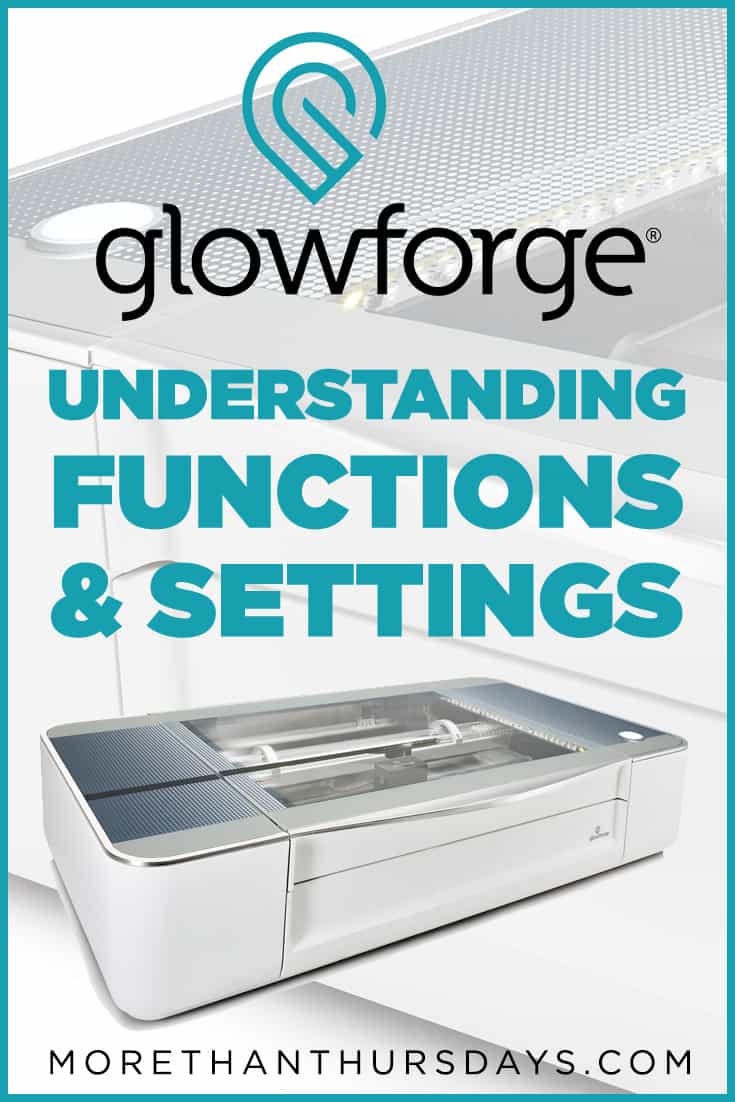 One of the most common things that comes up in user groups and discussions is what different settings on the Glowforge mean, how they differ, and what they can do. In this post, I'll be going over what the different functions and settings are in the Glowforge interface, and how you can adjust them to find the perfect settings for your project.

While the idea of a laser can be intimidating, once you break it down, it'll start to make sense. There are three functions in the Glowforge Interface (GFUI) Yes, only three! 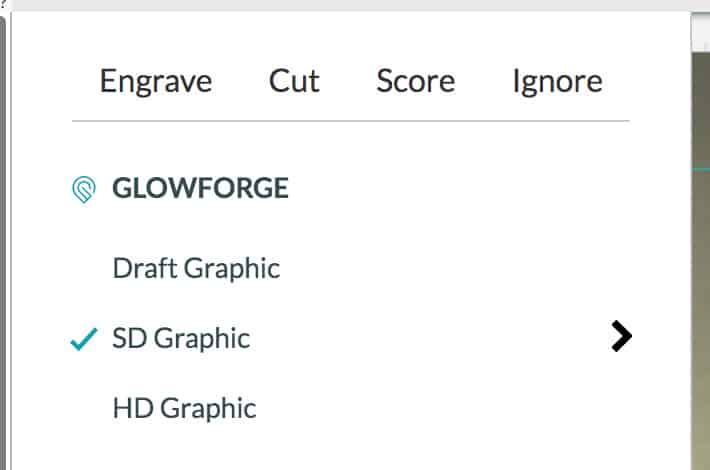 There's always some confusion about the difference between Score and Engrave. Some people use Score a lot, because it's a much faster process than an Engrave, but the two are not interchangeable as far as the finished product is concerned.

The image below shows the difference between the three functions. The red, blue and green stars are how they're set up in Illustrator, and the lasered ones below are how each of those functions perform. (Red is cut, blue is score and green is engrave) 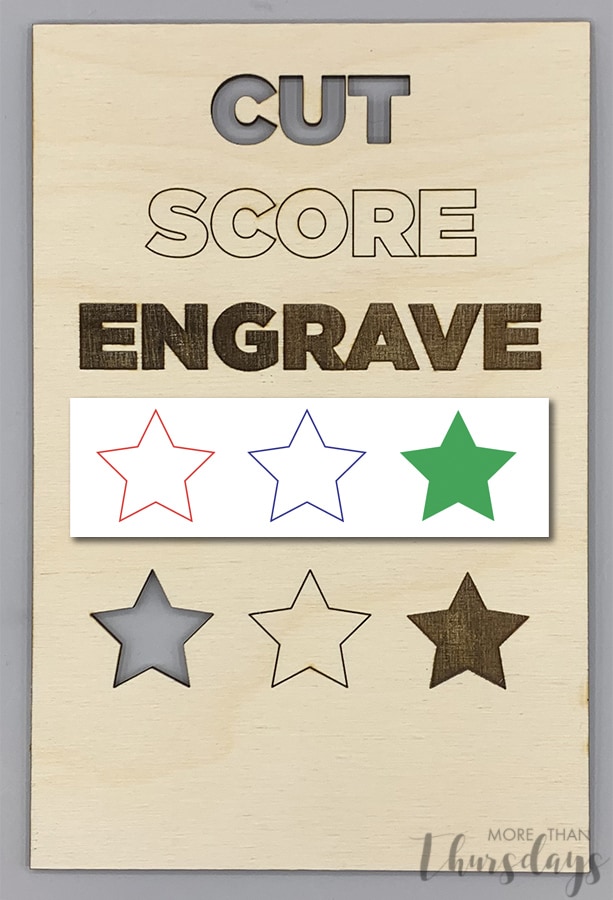 This is often the hardest one to understand, because it's not necessarily a familiar term for folks who are new to lasers. When looking at Score vs. Engrave, engrave is going to fill the area with very close together lines of engraving. You can adjust the LPI (lines per inch) to change the frequency of the back and forth.

Scoring is a single line, that can't be changed, and it's basically the width of the laser beam itself. When a file is set up, setting that function to Score will give you an outline, setting it to Engrave will fill the area with a solid fill.

Something to keep in mind when designing for the Glowforge, is that the GFUI does not take into account the Stroke that you may apply in your software. Looking at the example below, the three stars were set up with a 1 point, 5 point and 10 point thick stroke.

The blue stars have a Stroke applied, and the green stars have been converted to shapes (Object > Path > Outline Stroke in Illustrator) 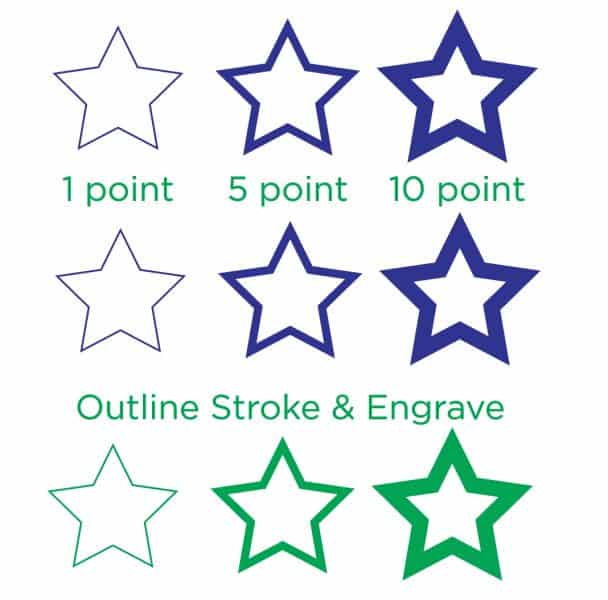 When you upload it to the GFUI, you can see that the stroke disappears. 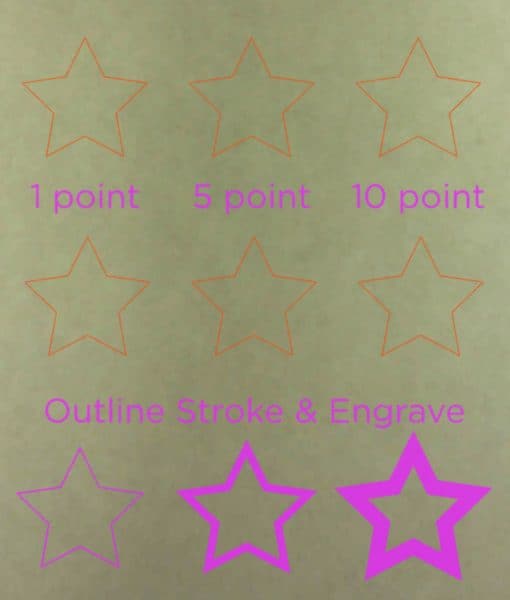 It's not until you outline the stroke that you'll be able to maintain the varying widths that were assigned to the design.

If you have a project with a lot of text, the engrave time can get overwhelming, and converting to Score instead of Engrave is often the approach people take to cut down on time. Looking at the image below, you can see a clear difference between the “Scored” and “Engraved” examples. (More about Single Line in a moment)

It's up to you if the scored look will work for your project instead of engraved. I find that I would usually rather have the longer laser time with a true engrave, but I do use score when possible to save a bit of time. 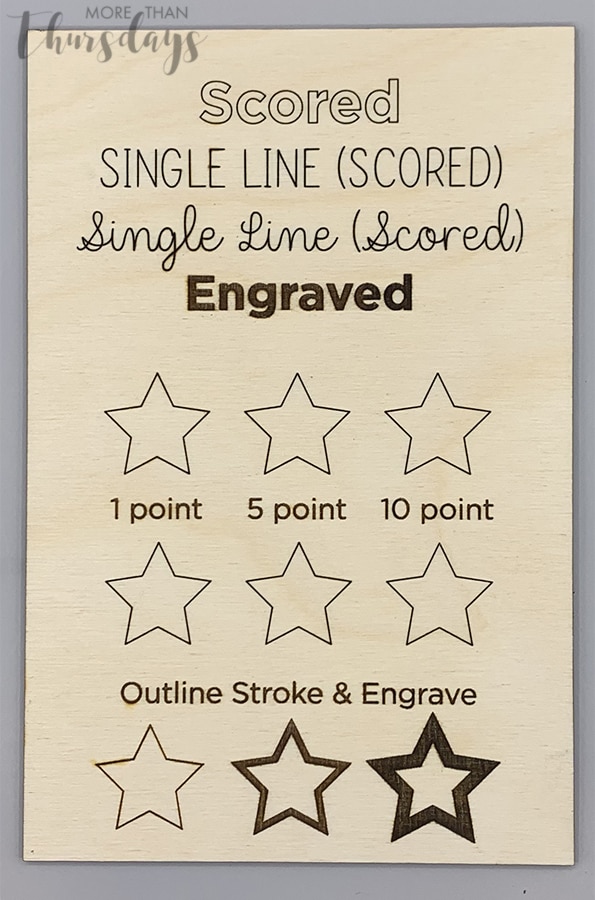 Single line fonts are a special typeface that instead of creating filled or outlined shapes, they are actually fonts that are made with a single line, so the Score function is able to make the complete letter with just one pass.

The two Single Line fonts above are both from Dear Agatha, which can be purchased here. If you use this typeface, be sure to set it to a stroke (not fill) and convert to outlines to turn it into shaped lines instead of editable text. Other fun single line fonts are Calline, Pinsetter and Mugsy Sketch.

You can control two laser settings in the GFUI: Power and speed. Much like the Exposure Triangle concept in photography, there's no single way to combine Speed and Power in the “right” way, but the two things are also directly related.

Power actually controls the strength of the laser beam; think of a light that's on a dimmer switch. You can turn it up or down. One thing to remember about the Power settings are that “Full” and “100” are not equal.

Speed is how quickly the laser head moves, so when you're engraving, it's the actual left to right speed of the print head.

When these things combine, that's where you can tweak settings for your specific project. Lower speeds + lower power = Higher speed + higher power. Just to use some random numbers, if you have a piece of 1/8″ material, you could try 170 speed and full power, but will get similar results with 120 speed and 80 power (These aren't tested examples, just for discussion)

This image below shows you the difference in changing the power setting, 10 units at a time. 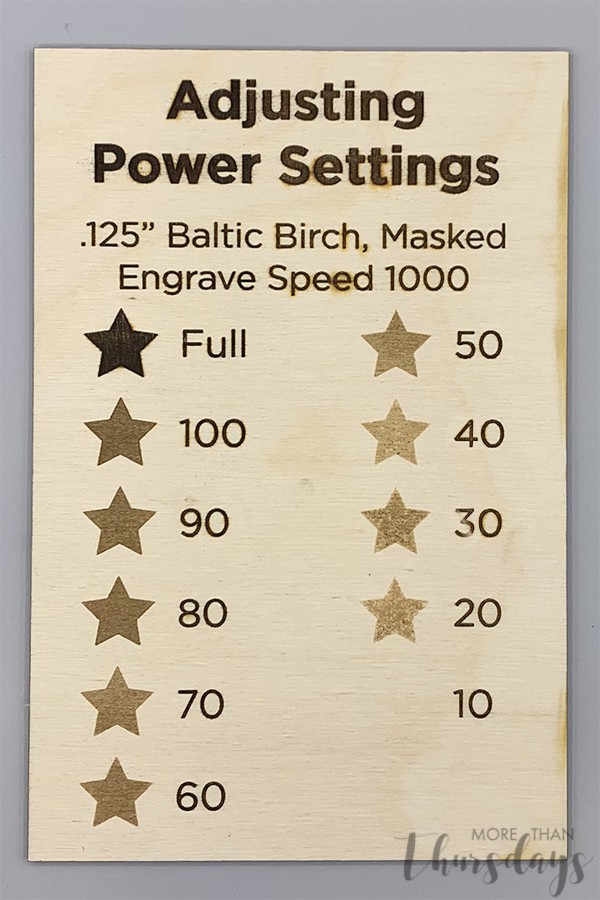 As I said before, there is no “right” or “wrong” choice, it's entirely up to you what sort of look you want. Mixing power levels of engraves can be a great way to create depth and interest to your design.

Get a discount on your own Glowforge when you use my referral link! Take $100 off the price of a Basic, $250 off a Plus or $500 off a Pro. The discount will be reflected at checkout after you add machine to your cart. Please don't hesitate to email me or ping me on Instagram if you have any questions! I love my Glowforge and love sharing about it with people!

Want to learn more about Glowforge?

« Make your own easy Butterbeer
100 Red, White and Blue desserts for Summer »