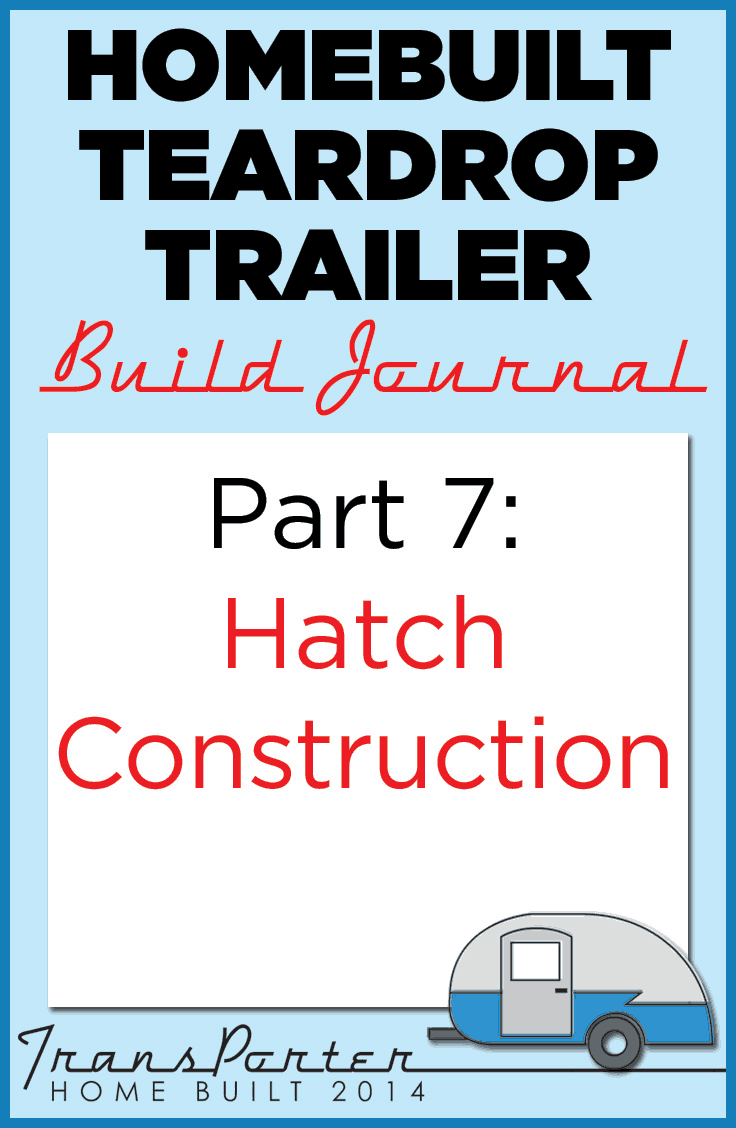 This post is part of a series documenting our homebuilt teardrop trailer, reviewing the construction and installation of the rear hatch. Please scroll to the bottom of this post for links to previous articles.

Back to it! Apologies for the delays (of like 10 months, oops!) since the last post… we're getting back to having them all posted in September and maybe into October.

The hatch being built was a big exciting step for me, because I could finally, REALLY, visualize what the finished product would feel like. I spent a ridiculous amount of time opening and closing just the skeleton frame of it, until Jamie shooed me away to keep working. It was very cool to see how close it was to being done at this point!

The hatch frame is made from poplar and plywood; the curved sides are cut plywood, using a router with a guide bearing and the same template as the sidewall. The crossbeams are solid poplar. 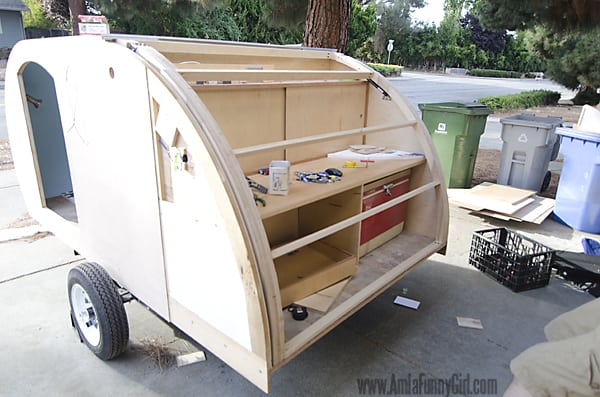 We used a single “hurricane hinge” to attach it at the top; it's watertight and runs the full width of the hatch. (This one is similar) We had found an old piano hinge at a garage sale, but decided the hurricane hinge was a better choice because it's both watertight and could be cut to the *exact* width we wanted. Also, in case anything were to happen, the hatch remains removeable (not easily, but doable) in case we ever need to make repairs or changes to the hatch. 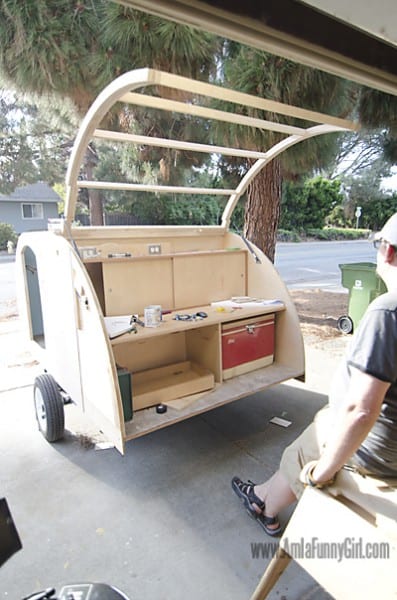 Once the hatch frame was done and the glue was dry, we skinned the inside with 1/8″ plywood and painted it to match the inside ceiling. The hole seen below is part of the latching system that was installed later. (It was later covered with a small panel of wood, so we can access it again if needed for future repairs.) 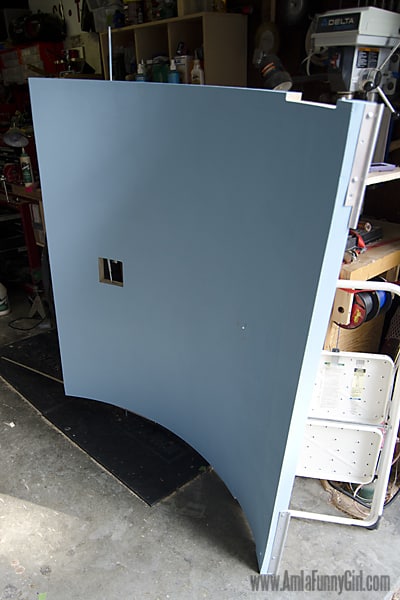 Test fitting the inside skinned hatch; notice the rods sticking out of the sides; those are part of the locking mechanism before they were trimmed to size. 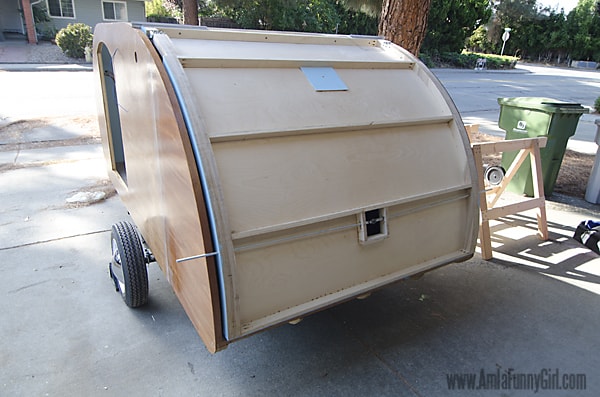 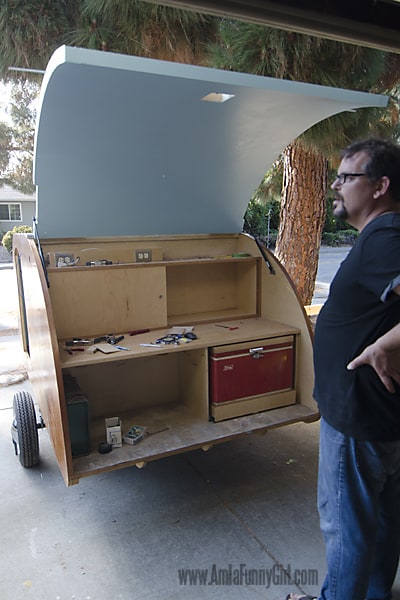 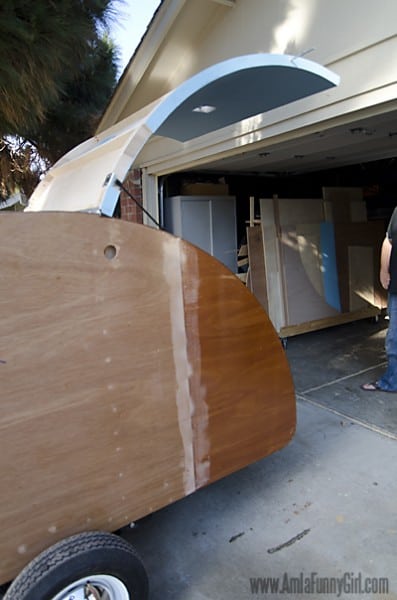 The locking latch; the rods latch in place, in holes in the sidewall frame, it's called a “t-handle” latch and we found ours at a car parts resale shop… but you can also source it online. 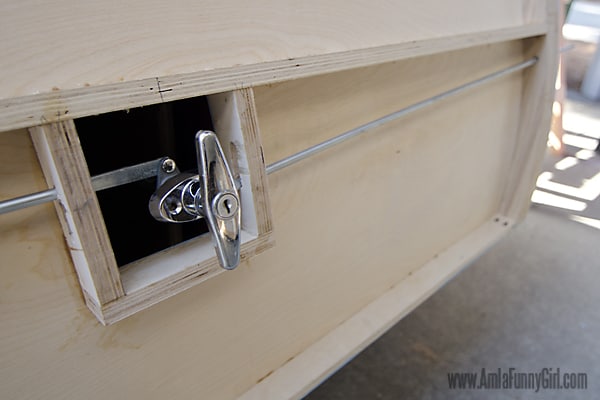 We then skinned and varnished the outside like the sides, using the marine plywood again. We used the same system of straps, glue and pin nails that we used to get the curve of the front as well.

I don't have any photos of us actually sliding the hatch onto the trailer though, because it's a 2-person job, so I couldn't be taking photos! LOL 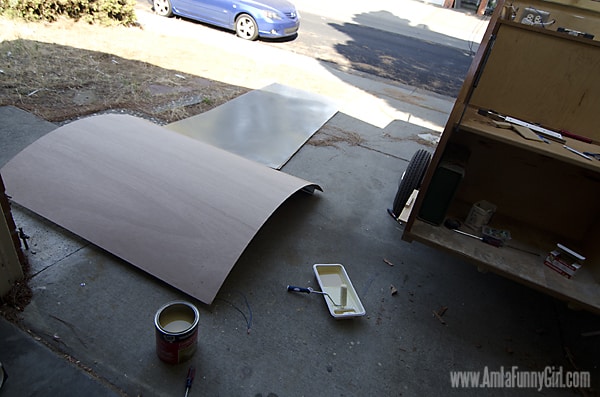 And the last thing? How to keep our lovely hatch from crashing down upon our heads while camping. We used 150 lb. hydraulic struts; more weight than we really need (the hatch weighs less than 100 lbs, and we have two struts holding it up) but with wind and better-safe-than-sorry, we went for the heavier weight capability. 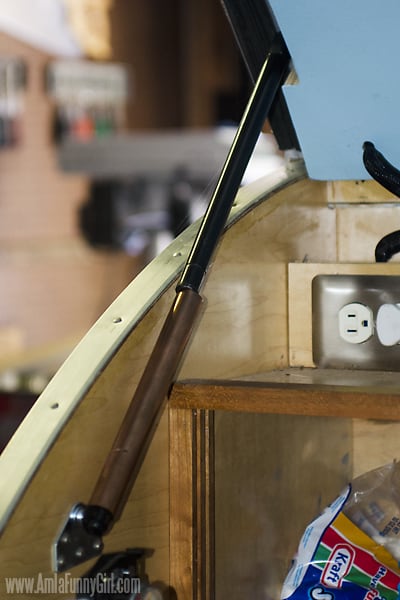 They leave the hatch easy to open and close, but we wanted to add another, secondary, safety mechanism.  The solution? A piece of copper pipe that fits right over the base of the strut, so even if it's pulled on, the length of pipe stops the hatch from coming down all the way. It's simple to move it, you just need to shift it up to the other cylinder to get it out of the way so you can close the hatch. Safety first, people! 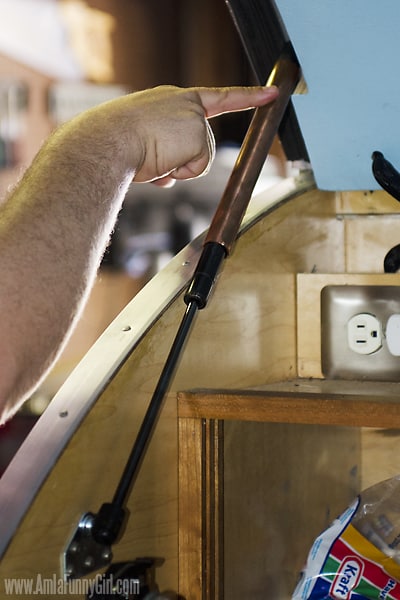