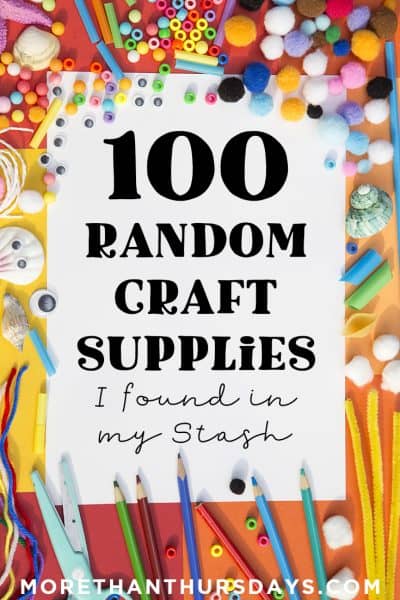 You've seen that joke, right? Why buy it for $2.50 when I can make it for just $194 worth of craft supplies? Contrary to what my certified certified professional organizer sister may think and say, I am not a hoarder and I do not have a collecting problem. I have a too many ideas and not enough free time problem, hence I was able to make this list of one hundred random items in my craft stash.

I buy a lot of my craft supplies online, especially from Amazon

and AliExpress. Oftentimes, these orders are shipping via ePacket directly from China, so it can take weeks or even months for things to make it to my mailbox. It's kind of fun, ordering things and then having them magically appear a month later, it's like you're your own secret Santa!

Unfortunately, because I do this so often, I will sometimes totally forget what my original idea was, or sometimes even double order because I forget that one version of an item is in transit when I come up with another idea. I mean, this doesn't *always* happen… The Pink glow-in-the-dark pigment that actually inspired this post? It shipped with some wooden dice that I've already crafted with, and I ordered them at the same time. I just don't remember what my grand plan was at the time. But I'm in great shape if/when I ever DO need glow-in-the-dark pigment in a variety of colors!

There's also an exception to some of things, which is buying in bulk when I only need a couple of them. Like the rubber dinosaurs and giant 1″ googly eyes. I don't *need* 144 rubber dinos, but they were literally cheaper than buying a 6-pack. Reading this now, it totally sounds like I'm trying to justify myself. Maybe? But if you're a lifelong crafter like me, I'm sure you have some mystery supplies of your own. Sound off in the comments or on Facebook! Maybe it'll spark a fresh idea for someone!

Now that I look at this list, I'm seriously tempted to see how many of these items I can use up in the next few months! (My sister would be thrilled! lol)

So fess up, crafters! What's the weirdest random craft supply that lives in your stash?

« Who knew ice nerds were a thing?
The most versatile shoe in your closet »