Max's feeds are, as of this morning, up to 32mL! Yesterday, at 30mL, he reached the milestone of one ounce! He's getting a whole shot of formula at each feeding! His goal for a “full feed” is 50mL, so each step is a step closer to home! (He is still increasing 1mL per shift, so every 8 hours) He is tolerating them very well, even though he tires out and can't always finish the entire bottle. We sometimes have to gavage (tube feed) the last 8 or so mL, but we're hoping as he gets bigger and stronger, he'll be able to get everything down from the bottle.
Getting full feeds from the bottle exclusively without any help from the tube is a *huge* milestone in busting out, so nippling him is really important at this point.

More proof that I have a fantastic boss and work for a great company; this is the slow time of the year for us, when I'd be taking a vacation if I wasn't saving my time for Max's homecoming… we are basically deadline-free until late July. Normally, I work shorter days during these weeks; come in at 10 or 11, take off at 4… it's pretty lazy around here right now. Well, Nicole agreed to let me tweak the usual plan a bit and instead I'm still coming in at 9 and leaving at 5, but I take basically 2 lunches every day, at 11:30 and 2:30, so I can zip over to the hospital and feed Max! I've been able to do 3 feedings a day, and Jamie does the evening (8:30) one, so we're covering half of his feeds each day! It's very exciting for us, getting to be so involved in his day-to-day care.

His weight yesterday was 6lbs 8oz… six and a half pounds! I can hardly believe it! He's still so tiny in comparison other babies in the world, but he's huge in comparison to where he was just a month ago.

We started immunizations. *sigh* I had really wanted to do a delayed schedule, but with this huge change in situation, I've had to stay flexible and we started his shots last night. Fortunately, Max's neonatologist has his own alternate schedule that we're basically following, so I'm still comfortable with which shots he's getting and when. He isn't getting more than one at a time, so they're a little spread out, and overwhelming his little system was really my biggest concern. Besides, his nurse last night pointed out that getting his shots is yet another pointer that they're starting to think about sending him home! 🙂 (If you're interested, the shots he's getting over the next coupld of weeks are Hep B (Because of the transfusions; otherwise I would have held off), Pneumochoccal (sp?) and the DTaP… the last 2 are against things that can and do get brought into the NICU, so I want to arm him the best we can against them when he's still so fragile.

I know, enough talking, on with the pics, right grandmas and grandpas and aunties? 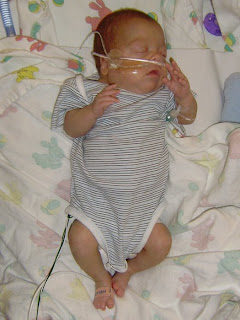 So handsome in stripes… in a size 0-3 stripe, I might add! 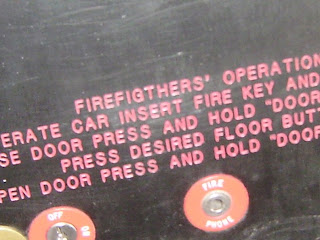 You spend enough time in an elevator, you notice things like these… see it? 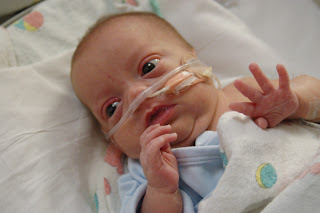 I have no witty caption for this photo… I just love it! 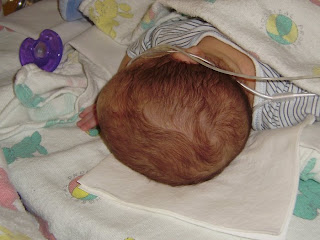 Surprisingly, his hair hasn't fallen out, and is actually growing in quite nicely! Considering I was bald as a cue ball until I was 3, we're thinking he got Jamie's hair genes so he's bound to be a little towheaded terror! (And I say that with nothing but love and a little bit of fear 😉 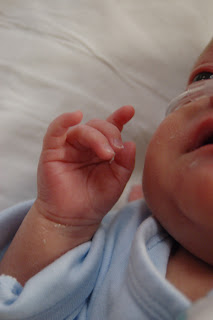 And a message from Max, for everyone who has been following his story and keeping him (and us!) in their prayers.
If you aren't familiar with American Sign Language, this is darn close to the sign “I Love You” *sigh*

My mom came over last weekend and helped us get the nursery done… all we need now is a baby! Huge thanks to Ashleigh who is such a big girl that she is letting Max use his crib! It's good to know that it's been all broken in already! I don't think anyone would use the term “Pottery Barn” to describe the room, but it's very “us” and we love it! There is nothing but love in this room; Jamie worked his butt off to make it beautiful, and now it's filled with gifts given by those who love Max, and things that we ourselves love. There are a couple of little touches we haven't finished yet, but I can't wait to share! 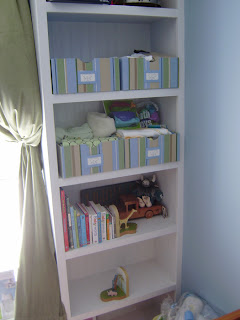 Jamie's built-ins on the back wall; we got the striped boxes at Babies R Us… so handy for organizing! As a tribute to my sister, I *will* be making labels to but in the little holders on the front. 🙂 3-6 month clothes, bath stuff, blankets and I have yet to decide what will go in the 4th box. 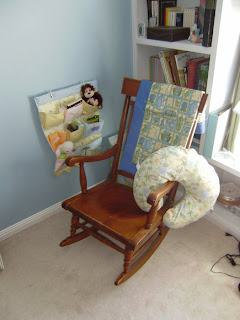 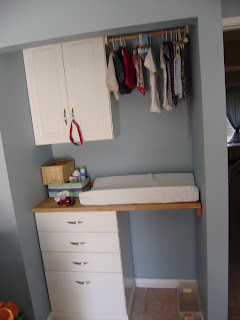 His closet looks pretty much the same as it did when we first did it, but now it's only got stuff he can actually wear in it! We put away the bigger clothes and realized that while we have an amazing stash of 6-12 month, he doesn't have *that* many 0-3 or 3-6 month outfits! Oops! Guess we have some shopping to do! 🙂 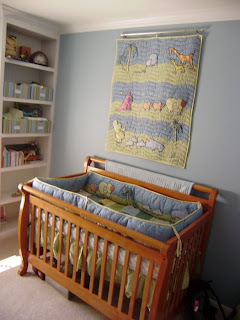 The afremorentioned crib with the bedding! I love love love this bedding so much! (Please no crib bumper lectures! I'm aware of the horror stories and dangers and such; he isn't home yet so I'm going for looks here! :)) We just got a basic cafe rod from Target to hold the quilt on the wall; it'll only be up there until he can pull it down, and by then it'll go in his bed with him. I couldn't see myself spending a bunch of money on those fancy “quilt clips” and then taking them down in less than a year!

That's it for now! We'll be back tomorrow with Thursday #11! I can't believe it!

« We have POOP, ladies and gentlemen!
Welcome to Holland »