Things are going good… medically, it looks like we're in pretty good shape. We've had a clear brain ultrasound (which will be repeated in a couple of weeks; the blood vessels in the preemie brain are so so so so tiny that they rupture easily, and small bleeds are not uncommon.) He still has the big fart waiting to happen, and his poor belly looks like it hurts, but they x-rayed it again last night to make sure it wasn't an obstruction or rupture or anything, and it's still just air. His breating apparatus (nasal canula) is set to 21% oxygen (“room air”) and that's the lowest setting it can be on… the flow rate was moved down to just 3 liters last night (from5) so he's definitely trending in the right direction! There are very few steps between him and the bottom at this point, as far as levels of breathing assistance, so this is one time when we're rooting for him to be at the bottom!

I'm feeling better as a NICU mommy. I went out yesterday and got Dr. Sears' Premature Baby Book and read more than half of it yesterday. I really liked his Vaccine Book a couple of months back, so I'm not really surprised I liked this as much as I did. I appreciate the way the info is presented and it's written well enough that it isn't a bore to read. If you ever have a friend or loved one with a preemie, run out as quick as you can and get them this book. I can't imagine how much I would have appreciated having it while I was in the hospital.
It really encourages the parents to be active members' of baby's medical team; as weird as it sounds, it never would have occurred to me to take care of diaper changes at this stage in the game, but that's exactly what Jamie did last night! (More on that later) Anyway, not to get overly preachy, but it's a great book that could be a huge godsend for overwhelmed parents (and won't die like flowers or rot in the fridge like a dinner they don't get a chance to eat because they're sitting at the NICU with thier baby in the evenings, not at home making dinner! Save those for after baby comes home!) 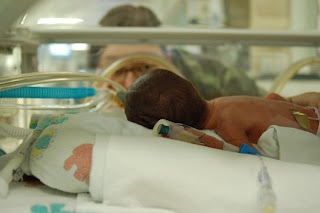 Jamie actually snapped this while I was still inpatient last week, but I think I was still a little out of it at that point and just “discovered” it on the camera this morning. And I love it… it looks like it could be in a magazine or something, I think. (Other than little exposure issues… but it's nice… Jamie has a good eye for angles and is learning how to use features of my camera!) 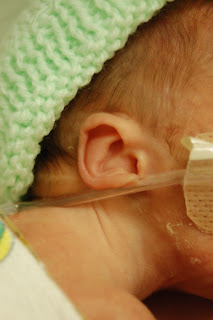 Proof that he's perfect, just very very very tiny… I really wanted to move hte tube so his ear would lay right, but I can't sacrifice my child's health and ability to breathe in pursuit of a photo op. I know, I know, what kind of scrapper am I? LOL 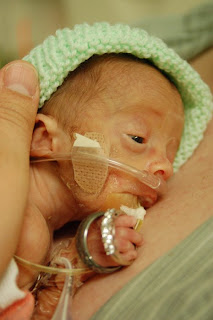 Holding my engagement and Jamie's wedding rings… (It was so nice being able to get some close-up shots without all the plastic in the way last night!) 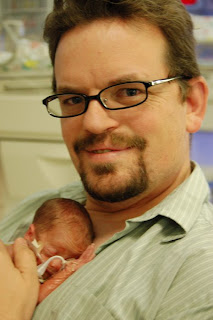 My handsome men. Jamie finally got his turn to hold Max last night… I think he agrees with me that it was worth the wait! One thing I had read in my Dr. Sears book was that dads doing Kangaroo Care (the skin-to-skin contact) had benefits for baby as well; the lower tones of the male voice provide vibrations in the chest that I can't do, so Jamie was humming to Max while he held him. I leaned in close and tried to hear, but it wasn't meant for me. So I asked what song he was humming… and that's where the title of this blog entry comes from! *sniff*

And that seems like an appropriate intro for this next photo… 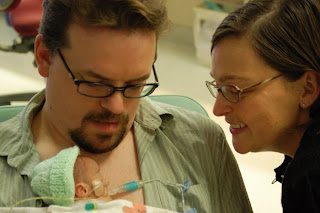 Oops! I said I'd talk about the diaper changing thing, and then didn't! When were taking Max out so Jamie could hold him, he was working on something in his diaper, so he was going to need a change… after getting out 45 minutes cuddle time, the nurse asked if one of us wanted to take diaper duty… I wussed out and Jamie stepped up! It was poopy and everything! I hadn't even seen the kid's naked booty yet, and wanted to *see* a change done before I attempted it myself… not so for Jamie! He jumped right in and took over! It was very cute.

Oh, and about Max's butt… he *literally* doesn't have one. There's so little fat on him right now, his bottom looks like the underside of a beanie baby or something, it's just all wrinkly and baggy; there's barely even a crack in it! Cute nonetheless, but not very butt-looking! LOL