I really think Max has turned the proverbial corner on the path to coming home!

We went to visit and feed him tonight to a couple of surprises, the biggest one being that he has pooped TWICE in the last 24 hours with no assistance! (He *is* on arythromyacin (sp?) as a pro-motility agent, but he didn't need suppositories! Previous to today's 2 diapers, he had only pooped once in his life on his own!) So that's incredibly exciting…

The second is concerning his feeds; we've gotten to about this point a few times, and when he gets to 14mL, that's when things go bad… he has had 4 feedings now of 14mL with almost zero residuals! They're still taking it slow, adding only 1mL per shift (8 hours) but this might finally be the time it works! He chowed down on his entire bottle tonight in record time, only taking a few minutes to get with the program and wake up enough to do his job. He had been having some problems with choking and desatting while we def him; his nurse tonight, Carol, said that she had really good luck holding him on his side to feed. (See pic) It's a little unconventional, and we're lacking that whole “gazing into one another's eyes while I give him nourishment and bonding time” thing, but I think we'll get through it… lots of time for bonding when he comes home, and if this weird stance is what it takes to make that happen, I'm all for it!

And, because we all love a funny baby pic… this is what happens when you push the bottle a little further into Max's mouth then he would like: 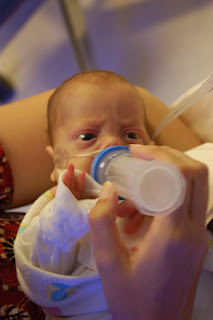 (He has his daddy's eyebrows! LOL)