…we have to actually *invite* them!

I started playing around with invitation ideas last night… I had had this idea a couple of weeks ago, and then had trouble finding the right image for the front… my darling friend, Elisabeth, offered me a stamp from her stash and voila! It's perfectt! I'm so lucky to have a friend like her, willing to help out! 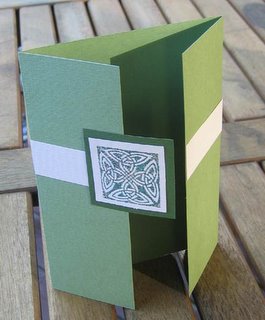 The closed invite measures 5×7, but that may be altered a bit, depending on the envelopes I end up choosing… I've used all Bazzill cardstock here… I don't know the 2 greens off the top of my head, but the white color is actually called Canvas. Whatever colors I end up using on the real invitations, I do want all the textures to match… I'm anal like that!
So I won't be mixing Raw Silk and Coururoy… I can promise you that! LOL
The stamp is heat embossed using “Marcasite” embossing powder from Judikins… I think I'll need a couple containers of it for the whole project!
The actual invitation info will be printed on vellum, and attached inside… I'll probably go with a green print of some sort, if black is too harsh. 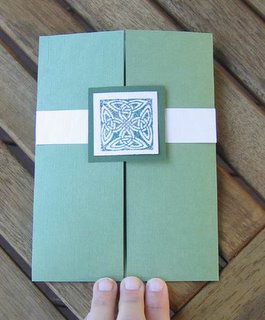 We have yet to finalize the actual wording, but I do quite like the idea of titling it with “Lizz and Jamie are getting married!” and then having more traditional wording in the body of it… so many of our friends only know us as Lizz and Jamie, it seems weird to refer to ourselves as Elizabeth and James, just because it's our wedding, KWIM?
The response cards, directions and such will be printed on the Canvas cardstock… I am toying with the idea of not sending response cards to everyone, and instead including a request for an emailed reply… my sister said she set up an email address for us “lizzandjamie@_____” or something… so I may just use that for people I *know* are more likely to reply via email than on a postcard (*ahem* Rodger)
Doing it that way might seem a little weird, but I'm looking at the money saving, paper saving and increased chance of responses that way! LOL
And that would only be for our friends, really… I'm not going to ask my Grammy to reply via email! That would just be weird!
But whatever we end up doing as far as response cards, I've got a few months before I need to deal with that stuff!
So that's the latest update for now! Please leave me feedback on what you think of the invite… I'm always open to suggestions!

Also, in other wedding news, my sister, our dear friend Jane and I are off to David's Bridal (again!) this weekend… I'm hoping to make my final dress decision! Even if I don't, we'll definitely have the camera this time so I can get some shots of both dresses with me actually *in* them! LOL