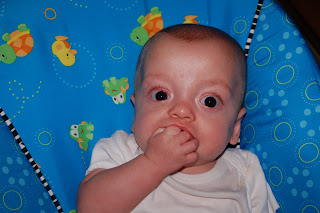 OK, so I'm a couple of days late again.
I have a good excuse, right? This week has been a little hectic around here.

This photo is from Thursday; we chose one with his hand in his mouth because it seems like he spends a lot of his time like this… if there isn't a bottle in his mouth, there's his fist. He's growing like mad, and we can hardly believe that he's already six months old!
It was actually on Friday, that he reached the half-year milestone.
It's amazing to reflect back on how far he has come in six short months, and how much more he will go in the next six. They say that once you have kids, time flies like nothing else… they aren't kidding!

Yesterday, Saturday, was also a milestone (I said it's been a busy week!) It was Max's 92nd day at home. He spend 91 days in the NICU. He has now been home with us for longer than he was in the hospital. The first day of the rest of his life, if you will.

We're off to the pumpkin patch today… it'll be the first time we've gotten together with Jane and Austin and Dave and Ann Marie with all of the kiddos, so I'm way excited to take pictures and see them all together! I promise an update later tonight or tomrorrow!