As I write this, Max more than likely weighs more than 4 lbs! We was up to 3lbs 15oz, and that was at last night's weighing!
He's been put on continuous feeds, so he's got a steady drip of formula instead of the larger feedings every 3 hours; he seems to be tolerating this better than the previous arrangement, and he's up to 6mL per hour, the equivalent of 18mL in a single feeding! A “full feeding” for a baby his size is 10mL per hour, so he's well on his way!
Next step, the bottle!

Something that it hadn't occurred to me to track is the temperature his incubator is being kept at; that crazy medical field uses the metric system, so you need to know that body temp is about 37 degrees celsius… in the first days, that's the temperature Max's bed was set to; preemies, due to their lack of body fat, are unable to regulate their body temp, so they, much like a cold-blooded reptile, need to be in a room that's the same temp they need to be. So anyway, one of his nurses mentioned the other day that his isolette has been turned down to 30.7 degrees… when it gets adjusted down to 28 degrees, it's considered room temperature and they'll then raise the lid on his isolette and let him sleep in it that way! Only three tiny degrees until that day! This is one of the big milestones a baby needs to reach in order to be released to go home.

Jamie and I have both gotten significantly more comfortable handling Max when he's outside his incubator… rather than just having the nurse place him gently in our waiting arms and then not moving a muscle for the hour or so he's out with us, we can now play “Pass the Baby” on our own and rearrange him as we see fit… because of this, we've been inviting people to come experience the fabulous that is Max cuddle time… lots of visitors these last couple of days have gotten to hold Max… almost like the first day of a term baby, where everyone gets a turn! 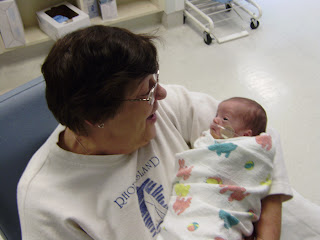 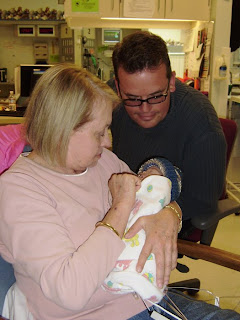 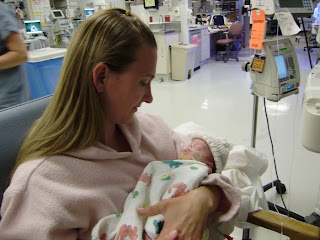 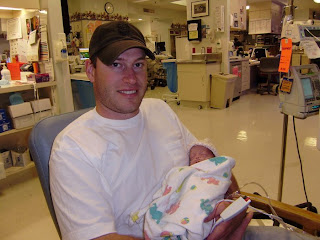 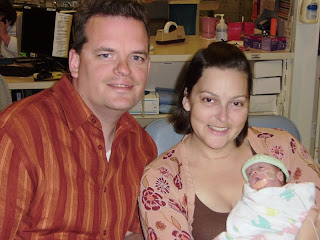 And here's just a random little collection of photos… 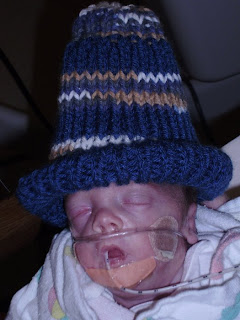 He's started to outgrow the little green hat he was originally given, and apparently the little old ladies who knit hats for the NICU only make them in 2 sizes, Small and Ginormous! Or as Jamie said upon seeing this, “We are from France” 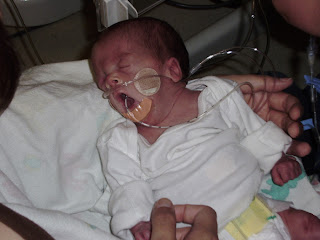 The end of Max's days as a nudist… the first time he ever wore clothes! It, much like that hat above, is one size fits all, so Max and the 12 lb. newborn next door could share this shirt! We just got an adorable little collection of preemie clothes from my friend Tania, so he'll be better dressed soon and we'll take lots of fashion show pics! But this is the shirt that starts it all! 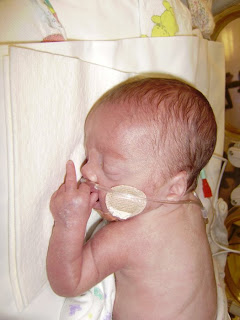 This pic (rotated for effect) is one of two reasons Max made his daddy proud yesterday… the other being that his nurse *heard* him poop from about 8 feet away and *through* the closed up isolette! *sigh* I'm in for a lifetime of poop and fart jokes and contests.