Even if there's nothing else to add, I need to update daily with Max's new stats! As of yesterday morning, he was 3lbs 10oz! Only a filet mignon away from FOUR POUNDS! He's now 15 3/4″ long, so he's gained almost 2″ since birth.
The doctors have still been working on his belly issues… a surgeon has now said that she's pretty much guaranteed it's not an issue of his intenstines “narrowing” (this is a good thing because fixing that requires surgery!) and if they can get his feedings up to full size (he's currently at 11mL; about halfway to “full”) then they're going to take a wait and see attitude and hope he outgrows the problem… it's not all that uncommon in preemies, since intestines don't fully develop until later in pregnancy.
He had his eye exam this week, which we've been waiting for. There's a condition called “ROP” (Retinopathy of Prematurity) that can cause serious sight issues. Because the blood vessels at the back of the eye are so, so tiny, they can actually become tangled, and the inturrupted blood flow can cause problems in the developing eye. Max's eye exam came out great, so now his only eye problems will come from his stupid parents! (But nearsightedness and astigmatism is much less scary than tangled blood blood vessels, doncha think?)

Here's a funny pic from the other night… you never get to see him all stretched out like this! 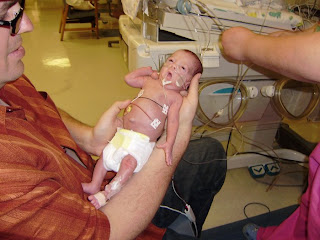 Nurses' Appreciation Week was a couple of weeks ago, and we wanted to do something nivce for the NICU nurses who do such an amazing thing every day. At the suggestion of some nurse Peas, we got them a 3lb bag of coffee beans and a grinder for the break room. I made the card, and inside it says “We figured since caffeine does such good things for Max, it might help you guys out too!” (Caffeine is used to help treat the apnea in preemies) 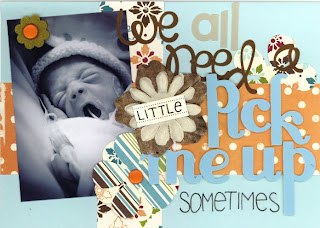 That's about it for this morning! Check out Thursday #6 (below) for a first look at some chub!

EDIT: OMG! How could I forget? We have a real belly button! The stump fell off the other night! It's quite an outie, as you can see in the photo, but Jamie had an outie too… I'll try to get a better button pic soon!