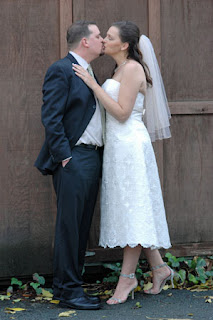 Well, yesterday was our first anniversary!

We spent Sunday out and about and had a wonderful time… we went to Pescadero on the hunt for a Christmas tree ornament for our anniversary (no luck :() We went to Duarte's Tavern for lunch; they make a cream of artichoke soup that is TO DIE FOR. I'm on the hunt for a recipe, because now I'm obsessed. They also have an abalone sandwich but at $25, we skipped that.
As a cool side note, Duarte's was recently featured on the Food Network's Divers, Drive-Ins and Dives

We went to San Gregorio State Beach, and other than stepping in some oil in my bare feet (remnants of the oil spill last month?) it was a perfect day for us.

Yesterday, I was surprised at work with a gorgeous bouquet of roses and Belles of Ireland. All the ladies in my office were *so* impressed that Jamie remembered our wedding flower! Not only did he remember, he actually had to ask a florist to get them specifically! He actually called to order those flowers for me LAST WEEK! I'm totally in awe. *sigh*

We then decided to set a new anniversary tradition of getting our Christmas tree! We went out for Chinese last night and then got our tree from the church lot down the street. It's not much, it fit in the backseat of the car, but it's ours and it's cute! Since we aren't “doing” Christmas here this year, we didn't need a full size tree.

And then there's this.

10 weeks on the 10th, so we're on track for a July 8, 2008 baby! If you saw my Calvin/Spaceman Spif post recently, it was a hint.. Jamie has dubbed the in utero baby “Spif” in honor of his beloved Calvin.

We will be finding out what we're having, so check back in February or so, but we won't be sharing the name until July, so don't ask!

One of the “advantages” of being high risk is that I'm being taken very good care of, and I've already gotten to see our peanut THREE times via ultrasound! When docs are talking at you about birth defects and low birth weight and genetic counseling, a girl's gotta focus on the good stuff!

(If you look close in the pic at the beach, you can see just a tiny bit of baby pooch… DO NOT tell me it's bloat! LOL)

So that's it. I'm out of secrets and surprises… for now!