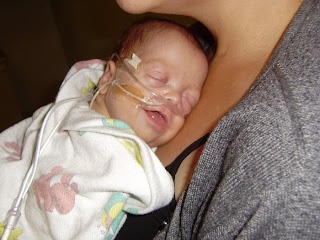 Jamie (finally!) managed to snap this pic of a smile the other night… he's been after me to post it ever since, and I apologize for the delay. So here it is!

Things are going good in Max-land… his feeds, as of 8:30 this evening, were up to 53mL. I've been saying that 50mL is the magic “full feed” number, but he's grown so much this a full feed for him is now up to 60mL! He should get there for the night shift on Friday. What a great birthday present for me! So sweet of him to oblige with the digesting and all!
So he's now eating and pooping like a champ, but he's developed some breathing issues. He's had a bit of a cough for a few weeks now, but I (we) assumed it was related to the congestion we'd been hearing in his chest… like a cold. Then the doc told us on Sunday that he thought there might be profusion pneumonia, that a chest x-ray had shown some areas of cloudiness on his lungs that was cause for concern. He was put on antibiotics for a few days while waiting for a culture to come back. No pneumonia, thank goodness!
So he's had this (I have to admit, cute) cough for a while, but I hadn't thought anything of it. Until this afternoon, when his nurse told me that “babies don't cough” We talked to the doctor again and he presented a new theory that sounds promising and would be a solution to the breathing thing… we're thinking that he may have a bit of reflux (totally common in preemies; it's odd he hasn't had it already) that is causing the cough; the “products” of the reflux are then going into his lungs instead of out as spit up… it goes in the lungs, gets things irritated, and you get breathing issues!
Dr. Anderson is going to have a pulmonologist take a look at Max and see what's going on… the good thing is that if it's reflux, it can be treated with medication and maybe a formula change. If it's not reflux, we're back to square one. *sigh*

So the truth of the matter is, Max isn't going be home before his due date. We realized it a while back, and we're OK with it. It sucks, of course, but it's what's best for Max, it's where he needs to be right now, and some day this will all be a distant memory.

So that this update isn't all doom and gloom, there was a BIG milestone this week as well! Since birth (and I've mentioned it a few times here, I know) Max has been on something called TPN (Total Parenternal Nutrition, we call it his Gatorade because that's what it looks like) That, along with a tube of lipids (fats) has been given to him through an IV since hours after he was born. It's what kept him growing through all those times that he couldn't tolerate formula, it's what kept him alive for a long time. His liver and spleen were starting to feel the effects of long-term TPN use, since it's not intended to be used for as long as Max was on it. Notice I say “was”! He is now, as of Tuesday afternoon, a formula-fed baby with no supplemental nutrition! As an added bonus to getting off the TPN, his central line was removed as well, so no more IV! One less thing hooked up to our baby, one step closer to coming home. 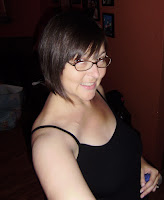 In non-Max news, I got my first Mom Cut! I've been unhappy with my hair for a while, letting a cut grow out since November… my sister encouraged me to do it, and I even got bangs! I'm really liking having my neck bare again, but I can still pull the front parts back to keep it out of my face. I think I'll keep this one for a while! Please excuse the MySpace style pic; I had to snap it fresh from the salon before the real world got to it!
Jamie and I went on a double date with Katie, Jas and Faith last weekend, to the DRIVE-IN! It was way fun! We saw Get Smart (OK movie, wait til DVD) Jamie's car is made for summer drive-ins, and the cooler with beer and Whoppers (no, not together!) was the perfect touch! We'll definitely be taking Max to “see” a couple of movies later this summer… it's the perfect solution for new parents and awesome movies! (Disclaimer: We'll take my car. The car seat isn't secure enough on Jamie's luggage rack)

That's about all from here… thanks as always for your love and prayers!