What's in your glove compartment?
Ooh! My deepest darkest mess-secret! My car has been broken into several times in my life, usually when the passenger compartment is full of Stuff… I think it just makes it look more tempted to the ne'er-do-wells who happen to pass by. As a result, I generally try to keep my car (visibly) cleaned out… so the little detritus of life that accumulates instead gets shoved in the glove compartment. 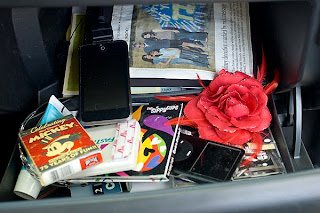 See what I mean?

I missed writing last week, since Jamie and I were away staffing a retreat, playing Mom and Dad to 40 or so high schoolers… and a post about that is forthcoming, I promise!