December 3 – Moment
Pick one moment during which you felt most alive this year. Describe it in vivid detail (texture, smells, voices, noises, colors)

Gawd, I'm such a cliche. I'm the mother of a 2-year old and a kidney transplant recipient; my life is comprised of moments that I want to remember. To document. To share. I scrapbook to try and remember as many of these moments as I can, which is why it's a little ironic that today's prompt was written by the one and only Ali Edwards, the woman who can be credited with introducing me to scrapbooking the way I do it now. I document these moments because of Ali, and now she wants me to choose one? One? Single? Solo? Just one?

I can't choose just one. When I'm *in* one of the moments worthy of remembering, I try to take note of everything… the texture, the smells, the voices, the noises and colors… that is, when I'm fortunate enough to realize that I am in one of those moments… oftentimes, you don't realize until it's gone that that was a moment worthy of remembering. One minute you're folding laundry on the couch, and the next thing you know, your baby says “Mama” for the first time and it suddenly doesn't matter if your t-shirts get wrinkled from sitting in a pile on the chair. You just want to hear it again, to be paying closer attention, to get a better mental recording of it. Because it's passed now, and all you want is a chance to get that moment back.

But I'm a team player, and I know at least *some* who read this will actually want to know about one of these moments that I can't choose from, so I'll start that part of the post right here:

Many people consider a moment a few seconds; the time it takes for a man to propose “Will you marry me?” or for a woman to say “I'm pregnant.” I'm going to run with one of the other definitions of moment, according to the dictionary: A brief period of time that is characterized by a quality, such as excellence, suitability, or distinction.

My moment, as cheeseball as it is to those who don't understand, technically runs from April to November, and climaxes with the San Francisco Giants won the World Series, which is the “moment” I'll use for this purpose. I'm lucky enough to have photographic proof of this moment, no matter how shaky the camera! LOL 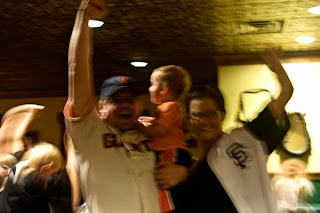 Our friends had invited us to join a party their neighbor was throwing (got that?) at a local barbecue restaurant. We'd been watching the games at home, just the three of us, so the chance to watch with other fans was certainly appealing, to say the least! The room was huge; I wouldn't say it would be good for a wedding reception (it's a BBQ joint, after all!) but I'd totally host a 4th of July or retirement party there! There were about 20 people there, plus half a dozen or so kids, of whom Max was the youngest. There was a table full of food; hot dogs and salad, chips and salsa. The chips weren't the kind I like, they were those slightly stale restaurant ones that I can usually ignore when they're put on the table.
We watched the game on a big screen projection television across the room, while the kids played in the back of the room. We drank Sierra Nevada and Bud Light (barf) and chatted and watched history unfold on the screen in front of us.

We counted the pitches and the strikes and the walks, and then there it was. The 9th inning, one pitch left in the whole thing. One pitch, from Brian Wilson's hand would end the game and make the Giants, for the first time ever in San Francisco, World Series Champions.

As he wound up, I swear the whole room held its breath. No one moved a muscle, lest we disrupt his concentration and make the ball go wonky and be called a ball. No one made a peep; heaven forbid we distract the master from his work. No one blinked, because we didn't want to miss it.

And then the room exploded. Deafening roar, from this little band of 20 fans, upstairs in a meeting room in a restaurant in Pleasant Hill. Once the initial excitement subsided, and we started chatting about calling in sick to work the following Wednesday for the victory parade, my ears were ringing, like walking out of a rock concert. You know, ringing, but in a good way.

I was in the midst of it, high fiving and hugging people I'd met only hours before, but it didn't matter. This was bigger than just us… we were all a part of this exciting, wonderful thing, together. For weeks afterwards, walking down the street, someone's wearing a Giants cap or shirt, and you exchange smiles (guys do the head nod) and you just *know* that it's a feeling you shared, on that Monday night.

And so, that's my one moment. In a lifetime of moments, so many worth remembering, so many worth forgetting, and many I wish I *could* forget, this is just one.

Oh, and by the way, we *did* go to the victory parade, along with what's estimated to a be a million (!!) of our closest friends. If you want to read that post and see lots of pictures, go here
« Thursday #138
Reverb10 – Wonder »