December 14 – Appreciate What’s the one thing you have come to appreciate most in the past year? How do you express gratitude for it?

How do you thank a man who gives you your life back? Seriously. Someone who, quite literally, gives you the gift of life. (I'm taking suggestions.)
The thing I have come to appreciate most this year is family. Beyond our little unit; beyond the people I shared a house with.
When I went back on dialysis in late 2008, I was prepared for the long wait, the 7-9 years my transplant hospital tells people to expect, for a donor to come available; the time it takes for it to be your “turn”
My mom had already donated to me in 2004; that was the kidney that failed. My dad has hypertension, and my sister had been eliminated for other reasons back the first time around. I wasn't willing to have Jamie be tested; now that Max is in the picture, I simply wasn't comfortable with both us being in surgery (with all the risks that entails) at the same time.

And then Tim stepped up. 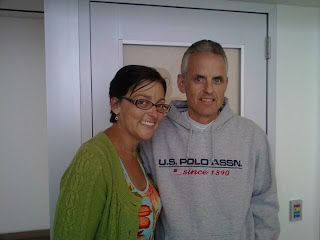 Tim is Jamie's older brother, a man I had spent time with on only a handful of occasions, and here he was, offering to be tested. I asked UCSF to send him the packet of information, and then filed it in the back of my mind. I didn't want to dwell too much on it; if it didn't work out, for whatever reason, the less vested in it I was, the less pain I'd have to work through later. So I basically blocked it out.

Anyone who has read anything on my blog knows that I blocked it out for no reason; my proverbial eggs in that basket have all hatched and are now placed in my abdomen. (OK. That analogy veered totally out of control. I apologize for that!)

So Tim is my donor, and surgery is scheduled for July 22, 2010. Then I got sick and surgery had to be postponed; eight weeks minimum. Tim had already made arrangements with his work for leave, his teenaged daughters were getting used to the idea, and he would be home recovering during their summer vacation… it was basically a gigantic cluster-eff that screwed everyone up. I felt awful, and could just imagine getting a phone call that it wasn't going to work out after all.

So here I am, getting ready to go back to work tomorrow, after three months off, and I *still* don't know how to thank him enough. I've got ideas, but most of them involve being independently wealthy, which I certainly am not. I've asked various celebrities (mostly Oprah and Ellen) to help me do something big, but to no avail. He is in my thoughts always, his sacrifice and his gift is with me, literally and figuratively, every moment. And yet I am still at a loss to say Thank You.