This is my first (!) submission for The Red Dress Club‘s memoir writing project, Remembe(red)

This week, we'd like for you to write about your favorite fresh fruit or vegetable. Share a memory of when you first tasted it, where it came from, when you last had it, a favorite way to prepare it, and such.
Word limit: 700 My count: 369

He squealed as the berry burst in his grasp, a spray of dark purple marking his tiny fingers. He laughed with glee as it came off in his hand, and popped in his mouth, a smile spreading across his already juice-stained face.
Watching Max on that lovely August day took me back to my own first blackberry-picking experience, some 25 years before.

As one of the youngest kids at camp, having only turned eight a week or two before, I wasn't sure exactly what I was in for when the older girls from my cabin pulled me off the path as we all hiked through the woods to the swimming pool.
“Psst! Come over here! You have to see this!”
Not wanting to get in trouble, but also not wanting to be labeled “uncool,” I followed timidly behind the older girls, these 11 and 12 years olds with several summers' experience at St. Dorothy's.
“This is the coolest part of St. Dot's!” one of the girls whisper-yelled… it became obvious that whatever was about to be revealed to me was generally a poorly-kept secret.
We stepped carefully across a little ditch that ran alongside the trail, and then I saw it. Or them. Blackberries everywhere!
They were all in various stages of ripening; being the end of July, there were more that were ripe than not… I could see some bright magenta ones, not yet ready, and big, juicy dark ones, so fragile to the touch that they burst when I tried to pick them.
I'd never seen blackberries on the vine before, tucked amongst the thorns, a delicious little jewel being protected by these prickly guards. We picked as we ate and ate as we picked, until our hands, lips and chins were varying shades of pink.

We took Max to the u-pick-em berry farm last summer, to pick blackberries and strawberries for the very first time, and with him I once again reveled in the joy of finding The Perfect Berry; just the right number of drupelets, each one filled with memories of sunshine and that dark pink juice. As they pop on your tongue, a glorious combination of sweet and tart, they are the epitome of a summer day. 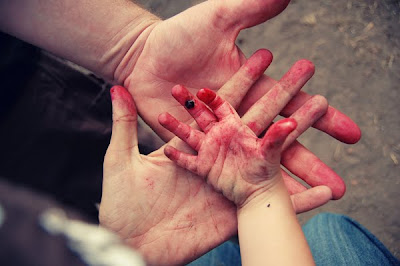