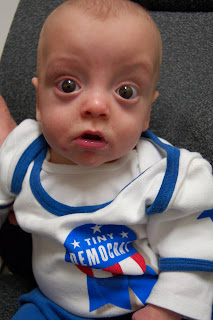 I voted this morning, did you?
I voted to take part in history… for Barack Obama and Joe Biden.
I voted for better treatment for farm animals.
I voted against a poorly written alternative energy proposition.
I voted that minors should *not* be forced to tell their parents they're pregnant.
And I voted to preserve traditional marriage… I voted NO on 8.
Traditional marriage is two people who want to spend every day of the rest of their lives together… who can't picture themselves growing old without *that* person by their side. They're signing up to be that person's everything; to make them soup when they're sick, to be able to order off a restaurant menu without having to ask what the other person wants. They're offering to share their home, their heart and their bathroom. They're willing to take the good with the bad, the highs with the lows, and every day in between.
Traditional marriage is two people who don't feel complete unless they're together. It doesn't matter if it's two men or two women.
Traditional marriage isn't just a man and a woman. It's two people.

As we stand here on the eve of these life and world changing ballots, I look at Max and wonder… “What will be the ‘Proposition 8′ of his voting career?” This election season has been unlike anything I've ever seen… every street corner is lined with people proclaiming their beliefs. I drove past my old high school this morning and saw dozens of students' cars covered with political signs. Young people are coming out in droves to vote and volunteer. Everyone wants to be part of something amazing, something historic.

And we were here.