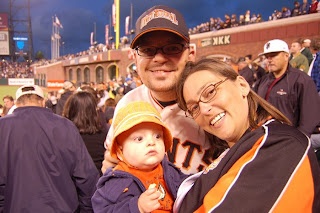 Jamie didn't have to work on Saturday, but we did get Max to go down for a great nap (THREE hours!) and we got some major cleaning done… took the living room rug outside for some air, moved all the living room furniture and vaccumed underneath it… it's been needing to be done for some time, so it was nice to finally make some real progress! We're embarking on a pretty significant decluttering, so we'll see!

So at the end of the day, around 5:00, Jamie's phone rang. It was Dave, calling to see if we had any plans… they had tickets to that night's Giants v. A's game in San Francisco, but were unable to use them. In a matter of 15 minutes (a new record!) we went from contemplating spaghetti or burgers for dinner to climbing in the car to take Max to his first baseball game! It's been a priority recently, to find a game to take him to, so the pieces falling into place like this was perfect!

We called and invited Papa, since my mom was off babysitting Faith (more on that in a moment) so we picked him up, picked the tickets up and headed off! Due to the short notice, we didn't get there until the 3rd inning, but we had a great time for the remainder, with Max staying his charming self right up until the strains of Tony Bennett echoed through the stadium after the ninth inning… as an added bonus, the Giants even won, 5 to 2! 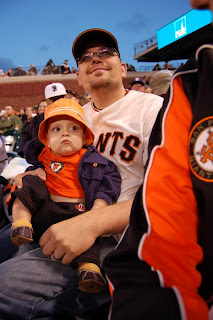 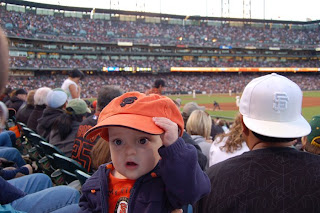 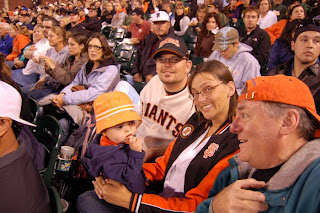 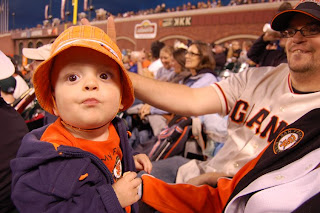 « We Will, with God’s Help
Happy Birthday Katie! »