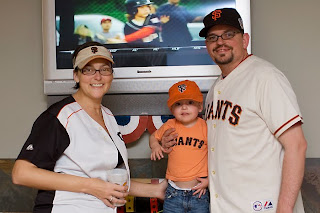 I drove to work this morning with my Giants playlist cranked on the stereo, singing along, gearing myself up for the start of another amazing season watching the Giants.
My Facebook News page and Twitter feeds were full of opening day exclamations.
While at work, I got the idea to do an Opening Day party, just for the three of us… my brain started planning and this is what we ended up with!

First off, decorations! Do you know how hard it is to find red, white and blue bunting in the middle of spring? It's hard. I called several party supply places, but with no luck… a friend made a suggestion that was a stroke of genius! I found a photo of bunting online, printed and cut it out and taped it to the underside of the television, for a little festive touch while we were watching.

Next up, food! Jamie's favorite thing at the ballpark is bratwurst, so I got some of those and some sauerkraut, which I know he loves and we rarely have at home. He sauteed up some onions for my brats, since onions are my new favorite thing, since I recently discovered they're delicious! 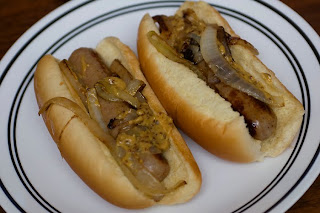 And snacks… I got some peanuts and sunflower seeds. I would have gotten the peanuts in the shell, but at home, I have to deal with the waste, so I skipped them and went for regular roasted Planters. All the yummy, none of the work! An orange bowl to collect the sunflower seed shells and food was set! (This is the best pic of the bunting, too) 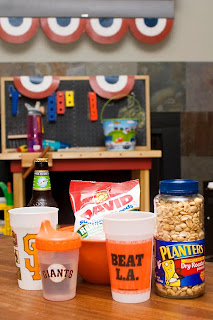 When Jamie got home, he found his jersey and hat on the front door, ready for him to put on, and Max and I were already all dressed and waiting! (He actually got off work an hour after first pitch, so the game wa being DVR'd while I avoided the internet so the results wouldn't be spoiled for me!) 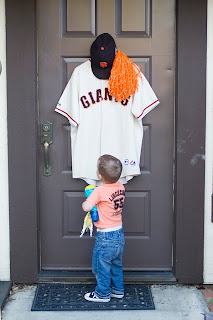 (I think we've gotten all of the wears we can out of Max's Halloween costume shirt! LOL) 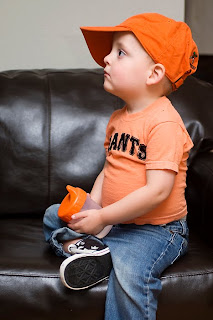 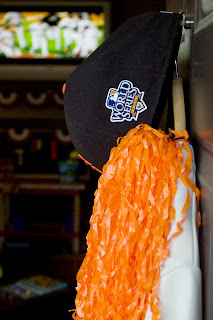 So, we celebrated the start of baseball season for next to no money, and we had a great time! We didn't love the outcome of the game, but we're in this for the long haul and won't lose faith just because we have one off night! Here's to 161 more games!