Thanks to Play-Well TEKnologies for providing this excellent birthday party activity in exchange for this post.
No additional compensation was received. 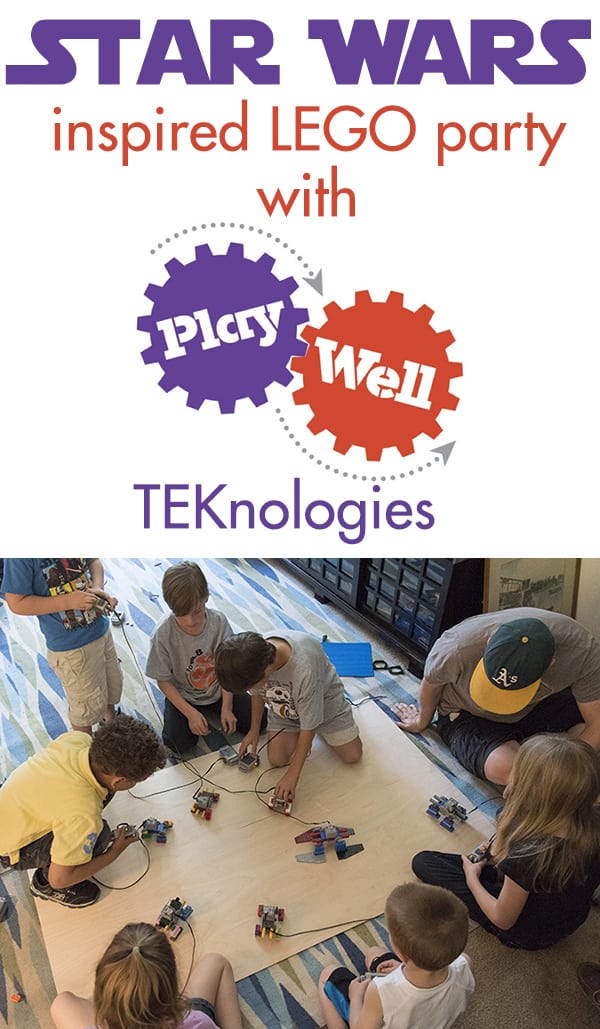 I'm not gonna lie. I was a little nervous when Max insisted that he wanted another Star Wars birthday party, and that he wanted more LEGO. We did Star Wars for his 5th, and LEGO for his 7th, so I was really concerned about being able to come up with enough ideas that the party wouldn't just be a rehash of previous years, so we needed a new way to throw a LEGO birthday party.

That's why I was so thankful when Play-Well TEKnologies reached out to see if I'd be interested in partnering with them; I knew about their summer and day camp programs run at schools all over the country (27 states!) and that we had a Play-Well facility near us in Pleasanton, but I had no idea that they would come to me for Max's party!

A quick peek at the Play-Well birthday party page showed me that this would be the perfect solution for Max's 8th birthday party. By having one of their LEGO experts come to our home to run an activity, I could still do all of the fun party planning I love, without the stress of also having to come up with something for the kids to fill the time.

It really couldn't have been simpler; I booked my date about a month in advance. The actual activity lasts right around 90 minutes, not including about 10 minutes of set-up time. I got an email from Play-Well outlining the schedule, and they asked for any info they needed to choose a project. I told them that it was a Star Wars party, so I knew that we'd have a Star Wars-themed build.

The day before the party, I got a call from Bryce, who would be our LEGO instructor the following day. He reviewed the ages of the kids who would be in attendance, confirmed our headcount, and then gave us two projects to choose from.

Max listened in on the speaker phone and made his choice for his LEGO birthday party. A re-creation of the Battle of Hoth, complete with motorized AT-AT walkers. Sounds good to me!

We set the overall party for noon on Sunday; we'd have pizza and cupcakes first, with the LEGO portion starting at 1:00 until about 2:30. Bryce appeared on our doorstep at 12:45, with a glorious stack of nearly 20,000 LEGO bricks in tow. 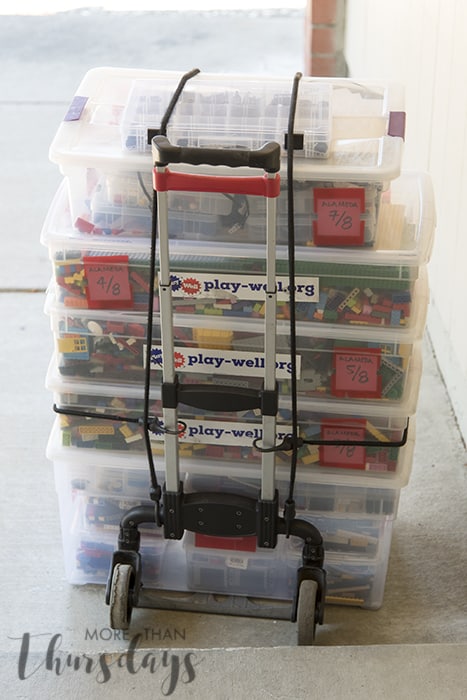 He set to work setting up while the kids finished their lunch, and before long, he was ready for them. They came into the room to find open bins of LEGO and baseplates for everyone. They had about 10 minutes to do a “freebuild” on a baseplate, making a collection of castles. The official Play-Well recommendation is kids to be 5 years or older, but we had two 4 year olds who did just fine. They both have older siblings though, so they may have more LEGO experience than other 4 year olds.

After a little building time to get everyone settled in, those were set aside for the next steps. Everyone gathered around Bryce to learn more, and this is where his amazing Kid Whisperer skills really kicked in. THEY WERE COMPLETELY QUIET FOR LIKE WHOLE FIVE MINUTES, YOU GUYS.

The motors were distributed, instructions were given, and everyone set to work on their own walker designs. Because of our carpeted living room, we brought in a big sheet of plywood from the garage for a better surface to walk on; this part isn't necessary if you have hard floors. 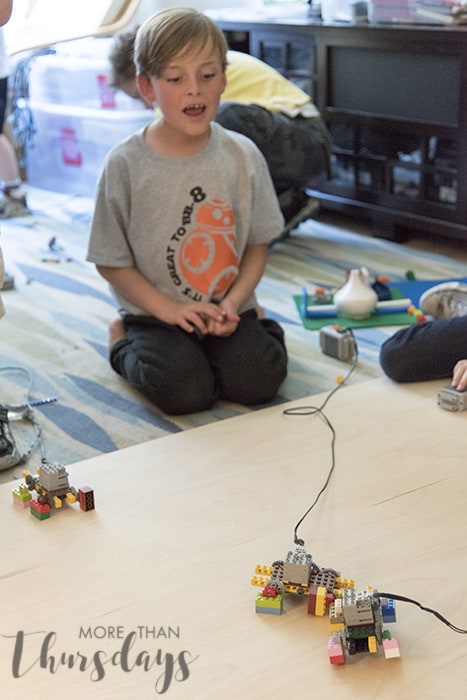 Things did start to get a little noisier here; you can get an idea of the walkers in action in this video:


After spending a bit of time testing out how to work their walkers, the kids split into two teams for the “battle” part. They lined up on opposite ends of the plywood battlefield, one side armed with LEGO missle launchers, the other with their walkers, and they tried to make it across the board without getting hit by a projectile. 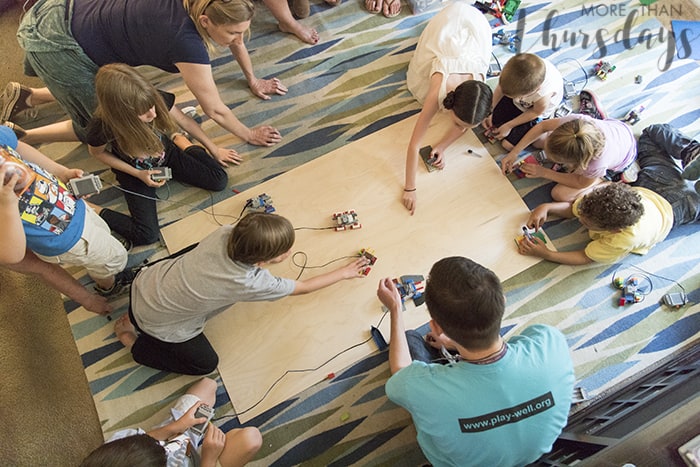 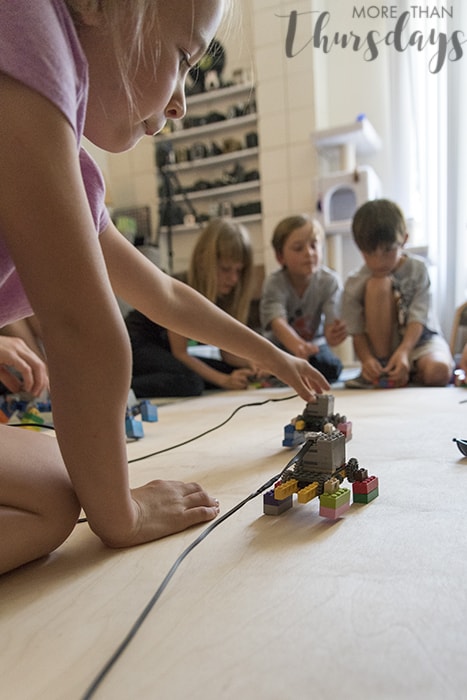 After a bit of battling with everyone getting a turn to be on each team, it was time to clean up. The kids are put to work to help, and by 2:45, everything was cleaned up and Bryce was on his way back out the door.

It was a fantastic party, and versatile for a whole range of ages. The builds can be more or less complicated for older or younger kids, and the adults had as much fun watching and helping as the kids did building their own walkers.

It was really nice to have a chance to actually visit with our friends while the kids were entertained and well taken care of in the other room. I can't recommend a Play-Well party highly enough for the LEGO lover in your life. 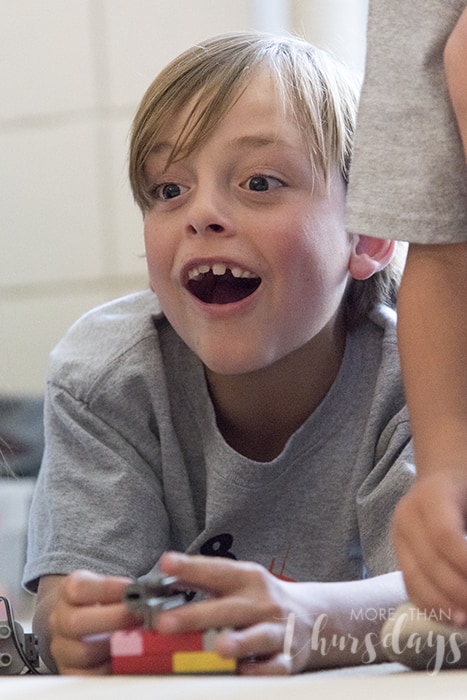