When we did our front yard last year, the finishing touch on the yard was a planter box; a 4'x13′ planter box alongside our front walkway… we had grand plans for a kitchen garden, but then time and the seasons got away from us and we were doing an excellent job of cultivating some pretty amazing dandilions with the fill dirt we'd accumulated in the box.
Once spring started to, well, spring, Jamie and I got the itch to do something with our box, and we were off!
Last spring, I'd picked up this book:Square Foot Gardening by Mel Bartholomew, after reading some rave reviews from friends.
After we'd both read it cover to cover, we were ready to get started!

Step 1: Create your batch of Mel's Mix, a combo of equal parts peat moss, compost and vermiculite. Mel, in the book, specifies to use several different brands of compost, so you can make sure you get a good assortment of ingredients. It took trips to 5 different stores, but we eventually assembled enough to start the project!
We spread a huge tarp out on the lawn, and started pouring! 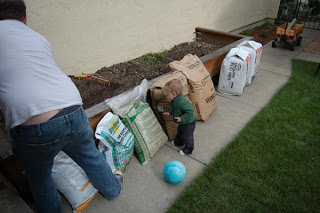 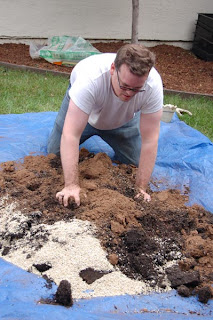 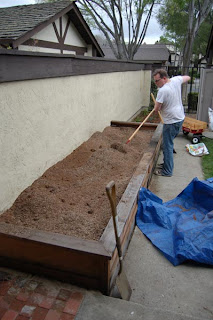 Here's a closeup of what our dirt looked like (we were a little concerned about what seemed like a huge amount of vermiculite, but it worked out in the end): 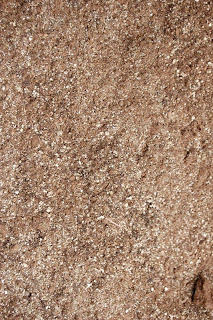 When all of the Mel's Mix was finally loaded into the planter, Jamie went to work building the grid, which is pretty much the centerpiece of the SFG concept. The book suggests using lath, but Jamie figured it would be WAY cheaper to rip his own lath from some wood he had on hand, so he put his woodworking skills to use and made our grid in no time! 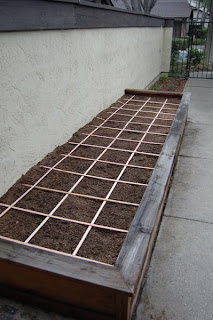 Jamie took care of the first round of planting, we have (starting in the back row, from left to right: basil, peas, red and green bell peppers, oregano, romaine, radishes, thyme, spinach, and cucumbers) 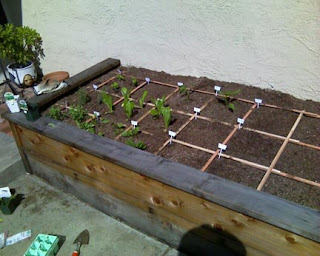 We're already enjoying our garden, and even Max likes to get in on the action, helping with the “gah-nen” (ie: throwing handfuls of dirt at the plants and playing with the hose) 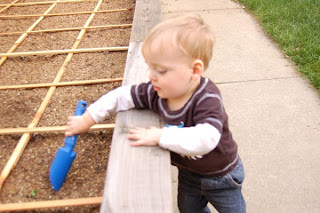 The next weekend, we tackled the tomatoes. Some friends of mine had said that their SFG tomatoes took over the whole box, so we put them at the far end, all by themselves… Jamie didn't like the looks of any of the trellis options he found, so he, once again, put those skills to use and built our *gorgeous* custom tomato cage! Aren't you jealous? 😉 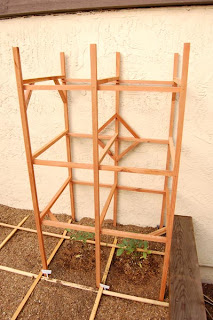 And it took less than a week for these radish sprouts to make their appearance! We can't wait just a couple more weeks to enjoy our first harvest! 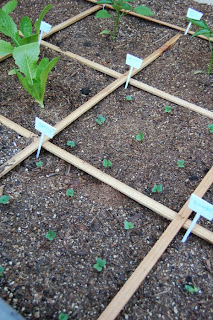