OK, so if you didn't get it from my last post, Max's birthday party theme is “Octopus's Garden” after the Beatles song of the same name… it lends itself to a party theme pretty easily, since it's pretty close to a standard “Under the Sea” theme, just with a twist.

Here's what we've got so far… invitations are done and will start heading out in the mail tomorrow or Tuesday!
You've seen the illustration in the early stages, but here's the finished product! 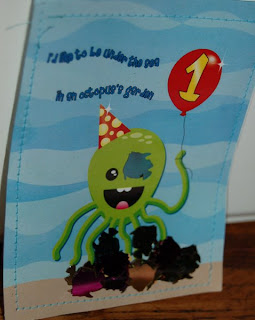 The wording has the first 2 lines of the song; “I'd like to be under the sea in an octopus's garden” There's a clear piece of vinyl machine-stitched over the front of the illustration, to hold in the fish-shaped confetti and… 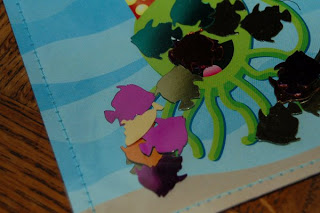 …each invite has a single yellow submarine in with the fish! It was Jamie's job to punch out the subs and stick them in the invites… thanks for the help, babe! (And if anyone needs little teeny submarine punchouts, let me know! I can hook you up!) 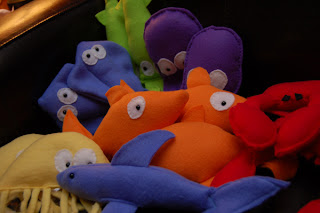 And I finished the party favors last night as well… I didn't want to buy plastic crap, and most of our guests are too young for candy (sorry Ashleigh!) so I wanted to do something different… since I'm sewing obsessed these days, I decided to make all of the favors! We now have an aquarium worth of sea creatures made of super soft fleece!
In typical Jamie and Lizz fashion, we felt the need to name all of our creatures… see if you can figure out how we came up with each name… some are easier than others!

So that's what we have planned so far! We hit up the dollar store last weekend to get plates, napkins and silverware in a variety of blues, I've ordered fabric for a tablecloth for the main food table, and I picked up some various cake decorating accoutrements for the octopus cake… I keep saying I'm going to do a practice cake, but we've been so busy with other stuff that I just haven't had a chance! Maybe next weekend…
« Thursday #48
A Very Important Message from Max »