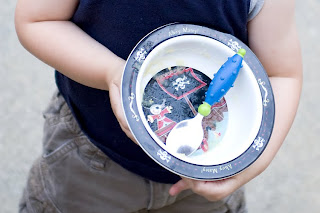 The boy loves his applesauce (and ice cream and yogurt and…) and does a pretty fantastic job of getting it from bowl to mouth without too much spillage. As much as his spoon-maneuvering has improved, there's still one skill he lacks… scraping the sides of the bowl for the last delicious bites.

He'll get up from his table and bring me his bowl. “Last bite, Mommy? Please?” He watches me eagerly as I scrape all of the bits into his spoon and swoop the spoon towards his open mouth.

Delayed gratification. He thinks it's hilarious that I tap his top lip with the loaded spoon, just a taste… he laughs and licks his lip, and I swoop in again. Three or four times I do this, before scooping the whole bite into his mouth. He swallows and grins and looks in the bowl. “A little more?”

And there always is… a little more. Just enough for one more little spoonful. One more round of utensil airplane.

Max probably thinks I have magical applesauce creating powers, that I can always get that second last bite.

He has no idea.

I leave the last last bite on purpose. It buys me that much more time. Another 15 seconds of him leaning close to watch me, another 30 seconds of giggling. Another mouthful for this boy who no longer needs to be fed by me. So many bottles we had together; hundreds of them. But not anymore.

He eats sandwiches, grapes and hot dogs whole. Popcorn by the handful. He dips everything in ketchup and thinks everything tastes better with cheese. Even peanut butter. As he turns into this self-sufficient little human, he needs me less and less.

It's true, he still needs me pull his pants up (or down, since we're potty training!) and to help him brush his teeth, but every day he's one step closer to total independence.

Part of me looks forward to the day when he can reach stuff I can't… that'll totally come in handy when I want to dust the ceiling fan! But in the meantime, I'm trying to just revel in and enjoy every day just the way he is. One last bite at a time.