But I challenge anyone in here NOT to cry when Sir Paul McCartney sits down at a piano, lights a candle and plays “Let It Be”

OMG! I have had the MOST amazing 2 days ever!

The Stones were cool… Mick is amazing and I think I have a weird crush kind of thing going on for Keith Richards. (But it ends at any closer than about 200 feet… that's where he gets scary lookin'!)
Everclear and Metallica opened, and OMG Metallica was so cool! Can I just say, total class act? James Hetfield gets up there and says “Hi, my name is James, this is my buddy Lars” and we just cracked right up.
He totally acknowledged that Stones fans aren't usual Metallica fans, but he asked everyone to “give us a chance! We're loud but fun!” LOL
The Stones opened with “Start Me Up” and never slowed down from there.
Very cool… I'm a bigger Stones fan than I was going in. 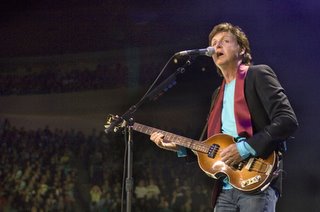 *sigh* Sir Paul. *sigh*
He opened with “Magical Mystery Tour” and closed with the reprise of “Sgt. Pepper”
He played every song I was hoping for… Let It Be, Blackbird, Yesterday, Good Day Sunshine, Helter Skelter (!), it was amazing.
He busted out only 3 solo songs from the new album and a couple of Wings tunes, but otherwise, it was all Beatles, all the time!

Anyway, I have to say… if you have even a passing interest in the Beatles, GO SEE PAUL McCARTNEY!

Totally worth the ticket price and then some!

« I can’t get no…
Concert reflections. »