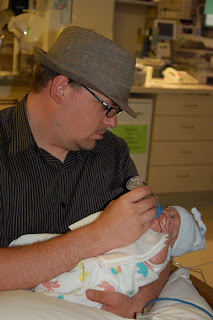 We actually celebrated Father's Day on Saturday, since Jamie was off work and Sunday was all booked up with Katie's big day (more on that later)
I brought in an expert (my dad) to make breakfast for Jamie; I'm totally egg-impaired, and my dad's a pro, so I asked him to come over early and make breakfast in bed for Jamie… Jamie woke up early and was already playing MarioKart when my dad got there, but he was surprised and breakfast was delish!
I then told Jamie that the day was his to do with as he pleased, so he headed out to the garage and futzed around for several hours, sharpening his planes cleaning up a bit… he so rarely gets to just hang out in the garage, he was a happy camper!

We had to be at the hospital at 4, so Jamie could get his turn to feed Max! I didn't update after my last long entry, but as soon as I posted about us getting to bottle-feed Max, they put a hold on his feedings, so Saturday was the first chance either of us got to give it a try… since it was Jamie's day, I let him go first. (I know, I'm a giver.) Max has taken to the bottle like a champ… he eats everything that's in there and would probably take more if he could. They're increasing his feeds very slowly (2mL every 12 hours) in the hopes that they'll stick better… previously, they'd been increasing them 2 or so mL every 3 hours, so it's possible part of his problem was just a matter of him system getting overwhelmed. (As I write this on Tuesday morning, he'll be going up to 14mL every 3 hours at some point today.)

Anyway, after Max polished off his afternoon snack, Jane and Austin came down to visit and get their chance to cuddle him… then all 4 of us headed to Alameda to celebrate Laney's bachelor degree and 30th birthday. We hit the road early because we had to be up so early on Sunday morning, but it was apparently quite a shindig after we left! (Congrats again, Lane! We love you!) 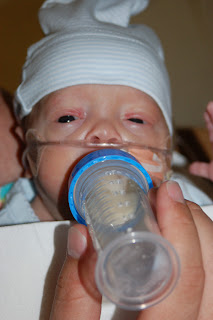 We had to get up early on Sunday morning… to be at my parents' house at 7:45… there at 7:45, in Concord by 8:30 for a 9am ceremony… what could possibly get us up out of bed so early on a rare day off? My sister got her Bachelor's Degree! A very exciting day for all of us… she's been working towards this for so, so long… it's going to be weird even for me, not having her in school any more! I'm so used to keeping track of her evening classes so I know not to call or try to make plans, knowing when her finals were so we didn't plan family gatherings to put demands on her valuable study time… I don't know what we'll do with ourselves and all this now “free” time!
After the graduation, we headed to Katie's house for a graduation/birthday party (Katie actually graduated *on* her 29th birthday!) which was, as always, a blast… margaritas, family, friends and a gorgeous day…. what more could we want?

So that was our not-so-relaxing but fun-filled weekend!

Now for the good stuff… Max has been having an amazing few days! I feel like he's really turned a corner and is he's getting ready to come home. (Fortunately, we picked up the crib from Dave and AM and got the bassinette from Jane and Austin, so now we have somewhere to put him!)
The doctors are very tight-lipped about a homecoming, but I really think it's more a matter of not wanting to impose deadlines that could disappoint us or anything.
We walked in on Sunday afternoon to visit to find, to our surprise and delight, the top of his isolette raise up and he was/is in an open crib! This is a great sign that he's maintaining his temps and is one more check mark in the homecoming list.
We brought in some clothes for him to wear, so he's cuter than ever, and he has even outgrown his rockstar hat (the purple and green on Victoria made… I'm partly bummed, because it's such a cute hat, but I'm also thrilled, because it means he's growing!)
He's been put on some pro-motility agents (read: poop assisting meds) that are having at least a small effect… he still isn't poopin' entirely like he should be, but there's some “action” there that wasn't there previously, so we're hoping things are moving in the right direction in that area.
He's rapidly approaching 6 lbs and will probably be there by the end of the week or soon after… the changes are amazing… he really is looking like a term baby these days, with little rolls of baby fat and he cries and fusses and it's all so amazing to see.

Every day we get closer and closer… thank you as always for keeping us in your prayers!