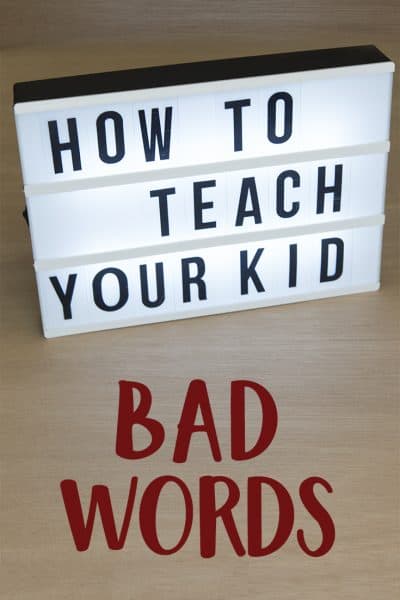 Years ago, when Max was a baby, I read an article about words. I've long lost the original source, but the concept stuck with me to this day. The author of the piece basically said that as a writer and a mom, she really struggled with the concept of “bad” words. Words have power and context matters, but the idea that a specific arrangement of letters should be unacceptable didn't sit right with her in raising her kids, so she just added in a context rule.

Example: If her 12 year old wanted to swear, he could only do so in the space of practicing guitar, because rock songs swear sometimes, so if it's in a song, it's clear. Bonus: Her son got better at guitar!

This article had always stuck with me, and as Max started adding to his vocabulary, it resonated loud.

The system Jamie and I settled upon is that there are no “bad” words, there are words with age limits. Like driving a car or drinking beer, using some words is a privilege that comes with age, so until you reach that point, they're off limits.

(Side note: Yes, there are a few words that will never be acceptable; I'm not talking about those. I'm talking about the more generalized swear and curse and pseudo-swear words.)

We started implementing our system when Max turned 8. On that day, we added one new word to his vocabulary.

It's pretty funny to see a boy who has, until that point, called passing gas a “toot” switch seamlessly into “fart,” and how often it comes up in conversation. We did have a few pretty fart-heavy days, but once the novelty wore off, it only comes up occasionally (and in context, most often a “Who farted?” and trying to blame the cats)

Starting last year, we've let Max make a proposal of what he would like his word to be. We've declined a few… he pitched “damn” for his 9 year old word, and we passed on that one. “Crap” is coming up when he's 12.

We still put some rules around these words, it's not a free-for-all. Like “stupid” isn't to be used towards a person, but that curb you stubbed your toe on or that LEGO you stepped on barefoot? They can totally be stupid. People are not to be called “turds,” but that's absolutely what he scoops from the cat every night.

Since he just turned ten this month, we have yet to hear any proposals for his 11-year old word, but he’ll bring them up throughout the year, usually when he hears someone say that might be a candidate.

Along with the new word permissions, there's always a conversation that goes with it, like I mentioned above. Some words that are never to be used AT people, and some words that aren't appropriate for some audiences. We talk about respect, and that “suck,” for example, should never be used when talking to a teacher. It's fine when you're talking to your buddies, but you need to always keep in mind who can hear you and who you're talking to.

We talk a lot about how as Max gets older, he's looked to more and more as an example, so it's important that he set a good one, and the words he uses are a big part of that.

As a writer, I love words, and the magic they can hold. I cried when we walked into Harry Potter’s Wizarding World for the first time because WORDS MADE THAT. We try so hard to instill in Max this same love and respect for words, but sometimes, you just need to make room for farts and turds.

Know someone in the thick of language development with kids?
Share this post or pin it for later!