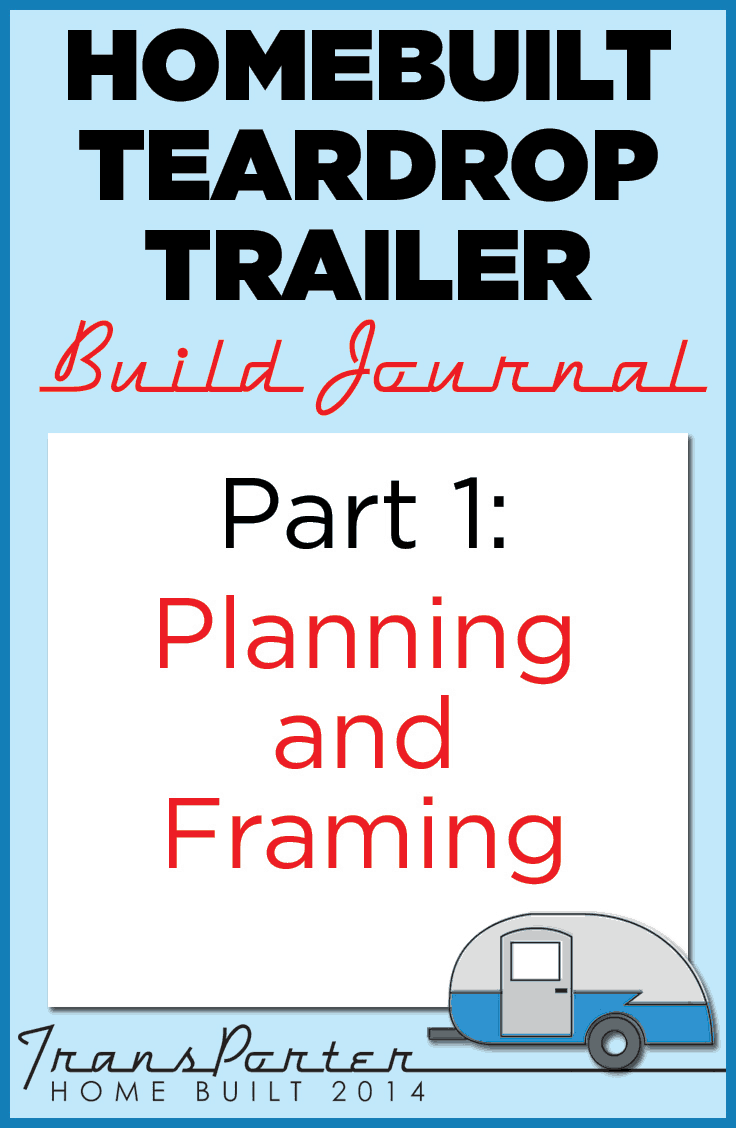 It wasn't always going to be a homebuilt teardrop trailer. Jamie first came to me about five years ago with an idea. Max was tiny, just a baby, and Jamie walked in and said “I want to restore a Volkswagen bus camper. Like an old one.”
Ever trying to be supportive of his ideas, I nodded and smiled and got him a copy of “How to Restore a Volkswagen Bus” for Christmas.
He enthusiastically flipped through the pages and then put the book aside.
A few months passed, maybe close to a year.
“I think I want to do a canned ham instead. Like an old one.”
Even if you aren't familiar with the term, you know what a “canned ham” trailer is; they're like the fifth wheel trailers of yore; they have names like “Lil Loafer” and “Shasta,” “Runabout” and “Scotsman.” They're the travel trailers you can stand up in. Like this: 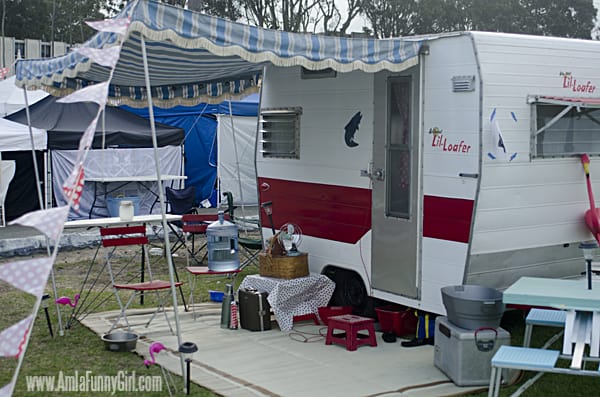 We spent the next year stalking Craigslist, lots of “Hey babe, come look at this one!” and contemplating what kind of car we'd need to buy to tow it.
And then finally, his idea changed entirely.
“I want to build a teardrop trailer. From scratch.”
Again, I smiled and nodded, and went back to what I was working on.

I basically put it out of my mind (again) until one day, he called me into the office. “Here. Pick a profile.”
There was a screen full of shapes; varying outlines of these tiny trailers. So I pointed.
“That one looks cool.”
“That one? You like that one? OK.”
And then it was done.

The #TransPorter was born. (Originally called “Porterable,” we changed the name midway)

This series of posts will be a combination of specs, materials lists, processes, photos, lessons learned and general overview of the build. Some writing will be done by me, some will be Jamie (the more technical stuff, obviously) If you're reading and have a question, please don't hesitate to leave a comment and we'll do our best to get you a useful answer. 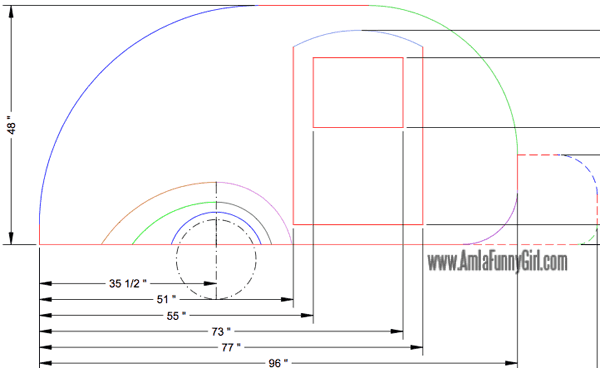 The first step was a giant piece of plywood and some masking tape.
(To be honest, I was impressed that Jamie was able to get the garage as clean as it was, to start this project at all!)

He carefully measured and taped, then cut out the finished shape with a jigsaw. 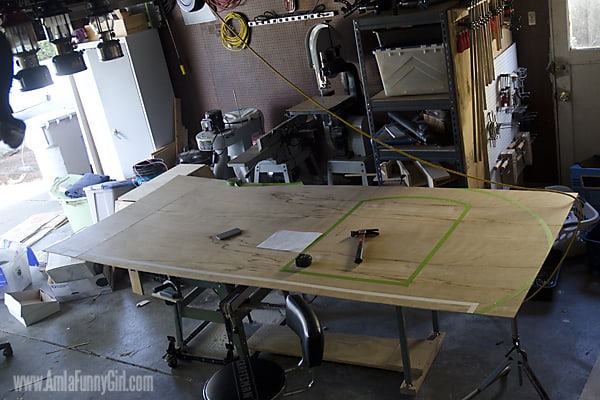 Looking at that sheet of plywood, listening to Jamie describe his plans, I was nervous. That thing didn't look nearly big enough for us to sleep in, let alone with Max! For reference: The blue tape outlines the galley in the back, and the future cabinets on the inside. Green is the door, and orange is the planned depth of the mattress. The tan tape at the bottom represents the 5×8 flatbed trailer that would serve as the base for the whole project. 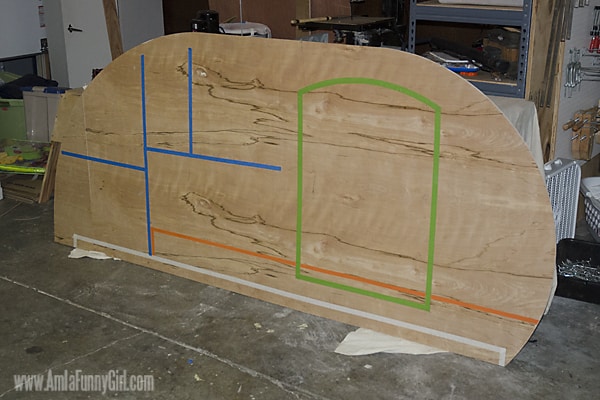 Once he had his template, he started constructing two solid wood frames. The frame is made with solid poplar that is glued and pocket screwed, with the screw holes filled in.

This was the first of many times that Jamie used enough spring clamps to call me out to the office and say, “See? I told you I didn't have too many clamps!” 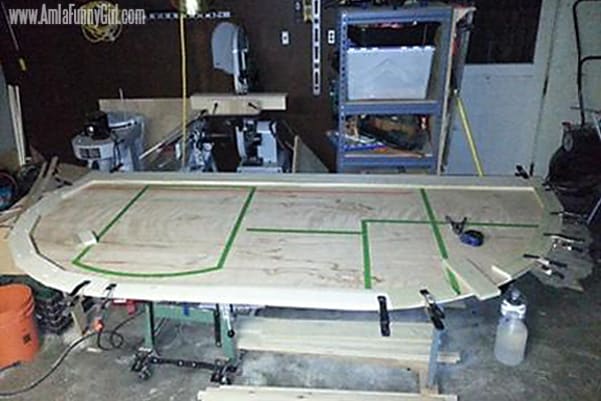 The bracing was put in place with the final design in mind; the horizontal support at the back (right side of photo below) was there to help hold up the galley counter when installed, the center horizontal one will hold up the interior cabinets that will be installed in a couple of years, after Max outgrows his hammock. The large space towards the left is where the door would end up.

He built two identical frames like this, and then it got scary. 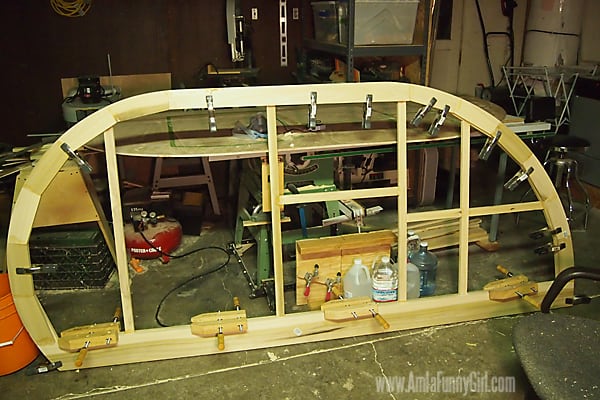 He ordered the trailer. A 5×8 foot utility trailer, this is the “one everyone is using” and after a couple of weeks, it appeared in our garage in all its flatbed, nowhere-near-a-teardrop-trailer glory.