We have a chin! 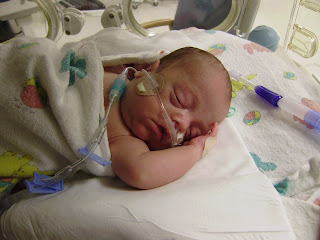 We went in to see Max last night and were amazed and thrilled to see (for me, for the first time) the bottom half of his face, all naked and free of medical junk! His feeding tube has been relocated to his nose (called an NG tube; you can just barely see it on the “underside” of his face in the pic) so now there's more of his gorgeous little face available for kisses!
WHY did they move his feeding tube, you ask? Well, it's so that he can have an easier time with the BOTTLE he's getting! They're working on his “nippling” skills and feed him once per shift through a bottle… one more step closer to coming home! Another exciting aspect of that is Jamie and I can actually be the ones to feed him now, giving us that chance to bond with him on a whole new level we haven't done before. He's fed on a schedule, so if we're there at feeding time, we can do it! We're currently hoping to be present for 2 feedings a day; one midday one, when I come visit at my lunch break, and one evening one, at 7:30. I'm really excited to take this next step in “taking over” caring for Max!

In other news, his central line was removed yesterday, too! It has gotten infected THREE times in the last month, required a week of antibiotics and setting him back a few days, so we've been wanting to get rid of it for a while. He's been getting his TPN (aka: his Gatorade, a liquid nutrient mixture keeping him growing even when he isn't being fed formula) through that line since they put it in, but babies aren't supposed to *be* on TPN for this long (8 weeks on Thursday! OMG!) and his liver and spleen are slightly enlarged because of it… getting him off the TPN is now a priority as well. If we can gt his feedings up and keep them going well, the TPN will soon be a distant memory that we tell him about as we hand him lemon-lime Gatorade at the Little League Finals (where he pitches, of course!)

He broke FIVE POUNDS yesterday! Just barely, by only one ounce, but still! He's a bag of sugar now! We had a neighbor baby who was about Max's birth weight… I saw one of the nurses holding her and couldn't believe how teeny she was… and then Allison (the nurse) pointed out that she had been 4 oz. *bigger* than Max at birth! I can already barely remember him so so tiny… it's weird! People come visit and comment on how tiny he is, and I wonder what they're thinking… he's Gigantic!

My mom and sister have said that they don't believe he cries… he does, and it's really (finally) starting to sound like a full, hearty, pissed off “Fix me now!” term baby cry… and I caught it on video! LOL
It's only about 20 secs. long, so you don't have to see him suffer or anything, he just wasn't in the mood for a diaper change at this moment…

My sister threw us the most amazing shower on Sunday… we had 30+ of our most important people, including kids and spouses and it was an amazing day in Katie's gorgeously redone backyard. I can't believe how much love went into some of our gifts; Amelia (my sis-in-law) knit bibs and a burp cloth, Lucinda (Jamie's step-mom) knit us an amazing blanket, and Wendy (another sis-in-law) made a beautiful Noah's Ark quilt. I'm still waiting to get photos from all of the photogs (*ahem* Dad) but I'll post lots just as soon as I have them!

Thank you, as I always say, for the love and prayers… Max will be home soon!

PS: Jamie thinks I should change the title of this entry to “He's no Jay Leno” because people don't know who Bruce Campbell is… leave a comment if you know who he is! 😉