This weekend we celebrated the 8th anniversary of the Bay Area Scrappers founding.
We had two crops, all day yesterday and all day today… I worked yesterday but got to play all day today!
Got SEVEN pages done, plus I did 2 demos that were raffled off to crop participants. 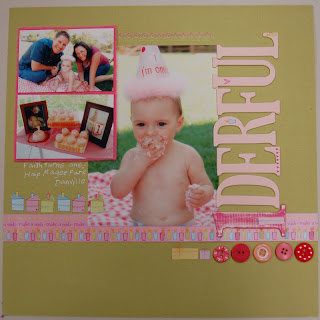 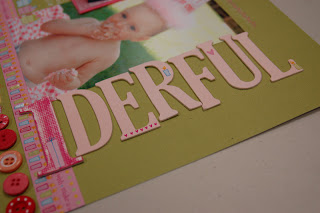 A few pics from Faith's first birthday party back on 9/16… I just love the one of her with the frosting all over… you can't really tell here, since it's a photo of the layout, but the pics are Photoshopped with a really pretty soft filter on them… she looks like a fairy princess angel doll!
For my scrappy friends, the paper and rub-ons are Heidi Grace and the letters for the title are Chip Chatter… oh, and the small pics are matted on a piece of felt for a little added texture. 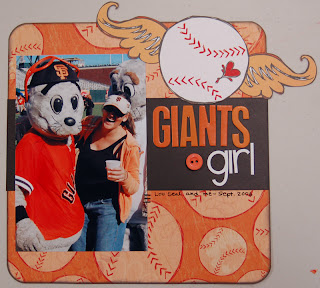 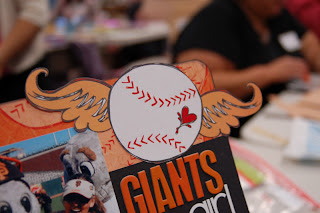 This is yet another page for the Reminisce DT call… I've basically had a crush on this “Sports Chick” paper since it came in last spring… I was determined to use it on a baseball page. It's supposed to be softball, but I trimmed off the softball words and voila! Baseball it is!
The pic was actually taken at the end of last season, right by second base at an onfield picnic we were at… I cropped out Lou's mom, and you can only see a teeny part of his dad! LOL 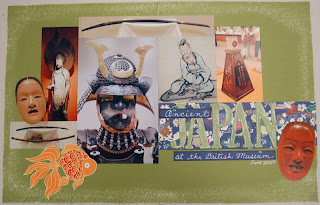 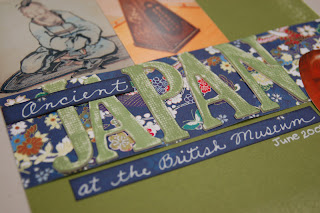 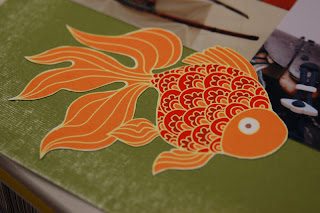 Honeymoon pages! I've been semi working on this one for weeks… the blue patterned and goldfish are the 2 pieces I bought at Paper Source… I've had the background cardstock and a couple of the photos printed and sitting there for ages as well.
Today, I finally had a chance to sit down and finish it! It turned out pretty close to what I'd planned, and it's the first time I've done a 2 page layout like this, working with it as a single page and not as two pages that happen to coordinate. (Comparing this page to the ones I did for the Louvre, for example) 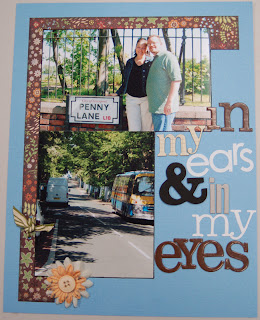 I didn't put it in the title itself, but I think it's apparent enough… the title is “In my ears and in my eyes” and the photos are from Penny Lane. If you still don't get it, it'll be in the scrapbok in between the “Home Sweet Home” and “Strawberry Fields” pages, so people will catch on! 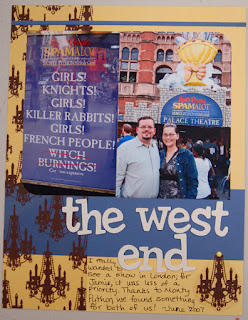 I know this isn't the most creative title ever (Sassy the Dog, anyone? LOL) but I was stuck for ideas. I really wanted to use the chandelier Hambly, because it seemed so perfect for a hundreds of years old British theatre… So the pics are us in front of the theatre and one of the promo signs outside it.
Journaling reads: I really wanted to see a show in London; for Jamie, it was less of a priority. Thanks to Monty Python, we found something for both of us!

My last layout needs a bit of an introduction… last weekend, Jamie and I, along with Dave and Ann Marie, went to the 98.5 KFOX Summer Sendoff Concert with (classic rock fans will be jealous!) Big Brother and the Holding Company (aka Janis Joplin's band), the Doobie Brothers and the Steve Miller Band! So fun! I've been a Steve Miller fan since forever and it was very cool to see him live.. that guy talks way too much in between songs though! Good gracious! LOL
So anyway, we went to this concert on Saturday night… it didn't end until close to midnight, and with the “emergency” Taco Bell run, we weren't home until closer to 1 am.
Getting to bed (a little *ahem* tipsy as well) after 1 am doesn't make it very likely that people (being us) are going to get up at the butt crack of dawn to be in San Francisco for the start of the Susan G. Komen Race for the Cure, which happened to be my sister Katie's very first race since she started training over the summer.
She had been running regularly, she collected donations, and this was her big day to run. My parents were there, Faith and Jas were there, but Jamie and I couldn't get it together enough to get there, and I feel terrible.
I want (need) Katie to understand how proud of her I am… that her dedication and accomplishments inspires me. Don't know if it inspires me to start running or anything crazy like that, but it is inspiring! LOL
So I do what I can… Katie, I made this for you. Hope you like it! XOXO 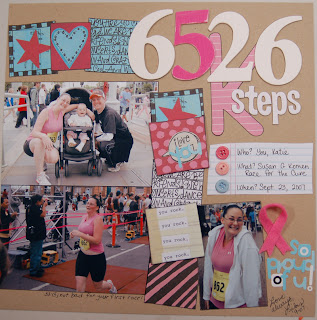 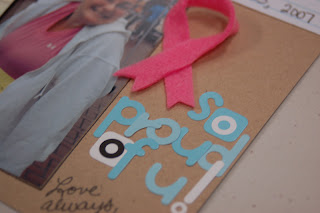 So the 6526 is an estimate… I asked some friends to estimate their stride length (friends closer to Katie than me in height) and I did the math. When I found there was a convenient “5” in the number, I decided to basically overlap two different titles, the 6526 steps and the 5k. There's loads of Love, Elsie on this, some Thickers and some KI bubble letters and felt and buttons.

And in other news, I managed to spend NINE hours scrapping in the store and I didn't spend a single cent! I used cardstock I brought from home even, swapping with other girls if a color wasn't quite right, and I did bum a little ribbon off Michelle, but otherwise I did it! The last time we had an event, I think my tab at the end of the day was over $50.00… I made it through today… I can do this!

« A layout and a challenge.
Operation: Simplify »