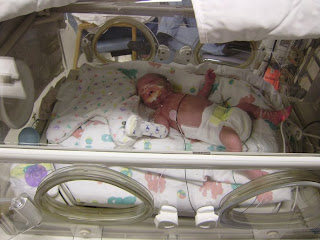 This is the crazy caddywhompus baby scene that greeted us the other day! Normally, his head should be on that star-shaped pillow thing, and he should be all centered and proper in the middle of the isolette. Not so with our little guy! He's been so squirmy and wiggly lately, he managed to get his feet off the edge of the bed platform (I don't think I can properly call it a matress) and this is what we see! Just more proof that he's growing and getting stronger!

There really isn't much to update this week… I'm finding that as time goes by, he gets more stable and there's less I need to say here, which really, is a good thing! We aren't getting the daily phone calls anymore with new complications or concerns, we're just waiting for him to be strong enough to come home.
We did get a great bit of news yesterday though… the pedi called me and said that he could barely hear Max's heart murmur! We've been hoping it would close up on its own so our poor guy could avoid heart surgery, and it looks like that's finally happening! After six weeks of limbo and wondering, his heart is on its way! Woo hoo!

There are still no definite answers as far as his belly is concerned… they did a rectal suction biopsy (poor baby!) the other day and we're waiting on the results from that. We have a potential diagnosis, but until we're sure, I'm not going to go into it here… there's too much scary stuff out there on Google, so I'm removing the temptation for you internet search fiends out there (myself included! LOL)

So while I might not be updating as frequently as I had been, please take that as good news, that things are progressing well… not that I've forgotten about all the people who love and are praying for us and Max every day!