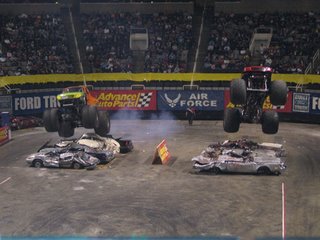 We headed to HP Pavillion, not quite sure what to expect… I was actually going to a Monster Truck Rally? I had seen commercials, so I knew we'd be seeing Gravedigger (A name I actually recognized! LOL) but past that, I really wasn't sure what to expect. 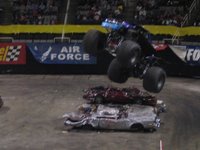 So this is where I start noticing the differences between monster trucks and other events (sporting and otherwise) that I've been to. The audience is *certainly* different from other crowds… there was some quad racing, some samck talking from the winner of that race (so fake, much like the WWE crap) and then the event started… they played a video montage of a color guard (Air Force I think) presenting the flag, innterspersed with footage of different truck events, all set to a soundtrack of “God Bless America” 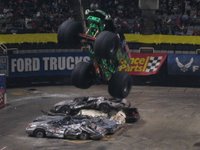 So the song is playing, the footage is rolling, the patriotic music is the background… and you see clips of disastrous truck runs… tires falling off, rollovers, all of this.

The song ends, and as part of the intro of the National Anthem, a guy walks out into the middle of the arena to talk about how Iraq, Iran and Afganistan doesn't have monster trucks. (W.T.F?) And that we should be so proud to be Americans, so that we can spend our Saturday nights at the monster truck rally, and that we need to support our troops who are over “there” fighting to keep our freedoms like that.
(Personally, a fail to see the correlation between quarter of a million dollar trucks jumping over totalled cars and the right to peaceably assemble in protest of your government, but whatever.) 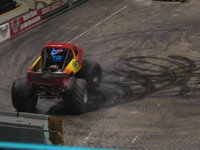 Then some aging rocker guy who look like a Bon Jovi impersonator came out and sang the Star Spangled Banner. (That song gets me *every* time, no matter who sings it, perhaps with the exception of Roseanne's monstrocity several years back)

So we have racing, we have freestyle, we have quad jumping (those guys are INSANE!) and overall, just a fabulous white trash kind of time!

So now is where I should mention that we didn't technically get the “full experience” of a monster truck event… allow me to show you our seats! LOL 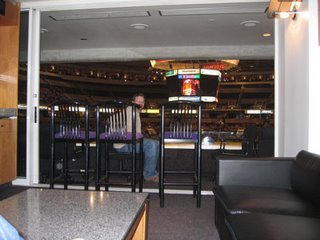 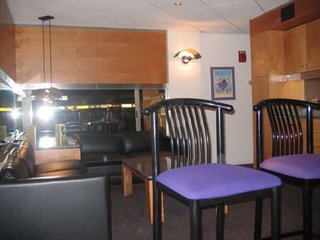 Disclaimer: The term “white trash” as used in this blog entry is not intended to be derogartory or insulting. If you choose to take it as such, you probably don't “get me” anyway and shouldn't be reading my blog. Have a great day!

« Photo Dump
Take me out to the ballgame! Now. »