We went to the game on Sunday (lost to the Dodgers… BOO!) but the day was salvaged by the on-field picnic for season ticket holders that was held after the game.
Free hot dogs, free beer, hanging out on the field… not much better for a baseball fan!

There were players serving up food and drinks, so we got hot dogs from pitcher Jack Taschner and beer from one of our favorites, 2nd baseman Ray Durham! We survived the mad crush of people at the beer stand, and got this pic of Jamie getting his beer… I did feel a little bad for some of the kiddos though, since he wasn't signing autographs and there were lots of adults pushing to get a drink… it would have sucked to be a little kid stuck in the throng… 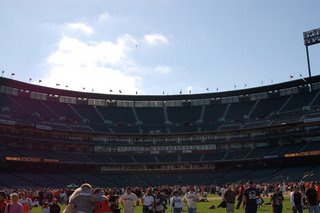 We gained a whole new respect for outfielders, standing there at the 350 foot mark… centerfield is a HUGE place! It's really hard to get a decent perspective on how far thoser guys are running from up in the stands! Wow. 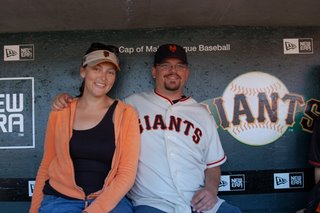 What? Oh, yeah… we hang out in the Giants dugout all the time… seriously… no, I don't mean the Dugout stores… I mean the actual dugout! We are NOT freaking out here or anything! We sit here all the time! (OhMyGawd! We're sitting in the dugout!) 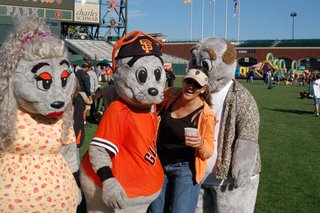 Lou Seal totally hit on me! LOL He tried to kiss me, and I almost spilled my beer! This is Lou and his parents, Mr. and Mrs. Seal. (And me… I'm the one that isn't a seal)