This was written for The Red Dress Club‘s memoir writing project, Remembe(red). Concrit is always welcome, and thanks for taking the time!

This week, your memoir prompt assignment is to think of a sound or a smell the reminds you of something from your past and write a post about that memory. Don't forget to incorporate the sound/smell of your choosing!
Word limit: 700 My count: 700 exactly!

I got my license in December, 1993, about six months after turning sixteen. My parents only had manual transmission cars that summer, so I had to wait until my mom got her new minivan, an automatic, to take the driving test. 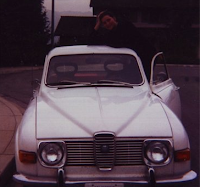 My mom's words flew right past me. I was getting a car! Of my own! And we were picking it up this weekend!

If I'd had Google, this is where I'd go search for images of this “God-awful” car that was now mine. But alas, I did not, so I anxiously drew pictures in my mind. I figured the worse it was in my head, the better off I'd be, so there would be a chance I could be pleasantly surprised.

And pleasantly surprised I was! I named her Sadie and she was my first love. With the back end of a Volkswagen Beetle and the front end of an old Volvo, Sadie was funny and adorable and had a four-speed manual transmission on the column. She ran rough, so my borderline shifting skills went unnoticed; when a car is chugging along, taking a mile or so to get up to speed on the freeway, the added jerk and jostle of a rough upshift doesn't make too much of a difference.

With this car came new freedom, and new responsibilities. I was now my younger sister Katie's personal chauffeuse. Katie and I did most of our extra-curricular activities together, so it wasn't too much of an imposition on my junior year social life, and we ended up spending a lot of time together in the car.

A few months after getting Sadie, I finally got a new stereo for her; one with a CD player and everything! My first errand post-install was to run to the local Wherehouse for a Case Logic disc holder that would velcro to my sun visor.

I don't know how it started, or which of us did it first, but it wasn't long before Katie and I had a “thing” when we were in the car. I pretty much left the U2 album in at all times, and when track eight would start, so we would start our car dance.

The first notes of “Mysterious Ways” would set us off into our choreographed routine every time, a little dance that stays with me to this day. The first 20 seconds of the song feature The Edge's electrified, almost synthesized guitar strikes, with eight emphasized strums backed by a light drum rhythm.

I'd look left, Katie would look up. I'd look down at my lap, her head would snap right. Up, right; left down; down, up. On the occasions we chose the same direction at the same time, we'd dissolve into laughter and stop the dance.

I don't remember what we did with the rest of the song, if anything. We covered a lot of miles in that car, mostly in and around Danville. We talked a lot, sang a lot, argued a ton. But whenever “Mysterious Ways” came on, we danced our little dance and all was right with the world.

I don't hear the sang as much as I used to; the 1,200 songs on my iPod (along with a picky almost-three-year-old in the car) means a much longer rotation than a CD with 14 tracks on it. But every time I hear that intro, my head snaps each way in time to the music. Car dancing.