1. It's delicious, duh. Crispy and salty and dissolve in your mouth-y. And loaded with lots of delicious fat and nitrates! The best part of the pig!

2. It's versatile! Can you say Baconaisse? (Tried it, didn't love it. Just so you know.) Or Bacon Salt? (Currently resides in my spice cabinet) How about Bacon Jam? (I actually saw this at Costco recently) Bacon vodka? (See photo below)

3. It's structurally sound! Assuming it's been fried to the proper crispy consistency, the strips of goodness are perfect to create a breakfast dam to prevent your pancake/waffle/french toast's maple syrupy sweetness from contaminating your savory and delicious scrambled eggs with cheddar cheese melted on top. They're the perfect tool, because the maple syrup only enhances the amazingness of the bacon itself.

4. It's an entree and side dish in one! I once tweeted the following: “Making BLTs for dinner. What side dish to go with?” and got no less than SEVEN replies of “More bacon!” Can you think of another food where this applies? Hmmm… we're having burgers for dinner… what should we have on the side? I know! Another burger! It just. Doesn't. Happen.

5. Adding bacon to things makes them funnier. Much like bare butts and “That's what she said,” bacon makes things funny. Exhibit A: Sex, Lies and Bacon If it were just called “Sex and Lies” it could be a super-depressing expose about a lonely woman who discovered her beloved husband's infidelities with his secretary/office manager/golf partner. By adding the word Bacon, Mely makes her blog into something entirely different, and most importantly, really freaking funny.

6. It's a decorative design element and textile pattern. 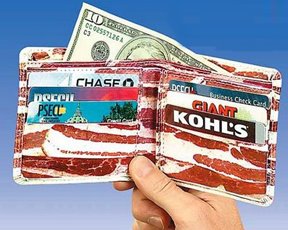 7. It's a counterculture movement. All I have to say is this: Bacon Camp 2011 (Gawd, I love San Francisco!)

8. Even its waste products are delicious! Bacon grease has been used since approximately March of 28 BC to flavor food. Someone on Twitter suggested using it to make popcorn the other night! POPCORN, people! How amazing does that sound? I think I'm going to ask Jamie to make me some bacon right this minute so we can make popcorn with the drippings. I knew I'd been holding on to my old kettle popcorn popper for a special occasion!

9. Its smell wields incredible power. It can lure a teenager out of bed early on a weekend, lead people across vast deserts in search of the source, noses raised daintily in the air. And incredibly, it still smells delicious in the house after a whole day! If you make curry or fish or onions, it smells good while cooking, but once dinner's over, you just want the stink to go away, right? With bacon, you have it for breakfast and when you get home from your day's activities, you walk in, breathe in deep and sigh, “Mmmm…. it smells like bacon in here! Now I want bacon!” It's kind of an endless loop, really.

10. It can convert vegetarians. We have a friend, who shall remain nameless, who has been veggie for a good number of years. Until it comes to bacon. He'll eat a pound of it in a sitting, and then he'll fry up some bread in the grease, to make some bacon-infused toast (or something)

It's got some serious powers, that bacon. And now, I have to go eat some.