There are lots of obvious developmental milestones with toddlers; learning letters and numbers, walking, running, jumping… it's the ones that you don't think about that sometimes hit you just so.
In Max's world, there are 2 kinds of cheese. Yellow (cheddar) and white (string) If he's in the mood for cheese, he specifies.
This morning, he asked me for white cheese, and I was happy to oblige. I handed him his opened string cheese and he sat on his chair to eat it. It was several moments later when I looked over at him, that I noticed something different this time… he's actually peeling off the strings instead of just chomping from one end!
*sigh* My baby's growing up!

And as a bonus for those who aren't on my Facebook, here's proof of how much he's growing… there's almost zero baby left when he has his new (and first!) official Giants hat on! Look! 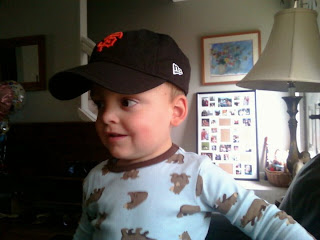