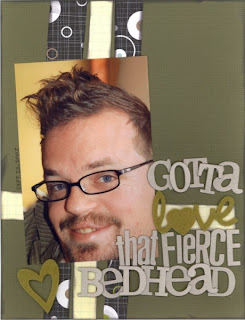 I snapped this pic of Jamie the other morning while we were eating breakfast… his hair really does look like that some mornings! (this specific morning was post-Doobie Brothers/Steve Miller Band concert, so it especially fabulous! LOL)

There was some discussion on the SIS board about whether or not people thought their style had changed (call it evolved?) since their time on the boards… I didn't think mine has all that much, so I decided to do a page that kind of pushed the limits of my comfort zone.

There are a couple of elements on here I've been wanting to try, namely the overlapping chipboard letters and the fact that I didn't use a straightedge or trimmer for any of the cuts on this page! (This is huge, people!) I just eyeballed and freehand cut everything with my Exacto (I *did* use a straightedge to cut the cardstock down from 12×12 though…)

I dug thorough my stash to find some cardstock that went with this patterned paper (summer release American Crafts) and then grabbed my trusty Heidi Swapp chipboard letters and a couple little pieces of new Fancy Pants felt.

Those HS letters are from her very first release, going on 3 years ago now (I think, right?) and they're still one of my go-to products. There's nothing wrong with them, I like them, and I certainly bought enough of them! (My stack of HS chipboard, when all organized, is a 5″ tall pile o' letters)

Realizing that I can still make pages I love with stuff that isn't necessarily the “latest and greatest” I've decided to give myself a challenge.

I am not going to buy any new scrapbook products except cardstock and adhesive for THREE months.

I need to keep the cardstock thing in there because my own stash at home is getting pretty picked over, and there have been a few recent times when I just don't have any color that will work! LOL

So I'm going to consider my start date September 24, 2007. I'll check back in on Christmas Eve (OK, maybe not *on* that day, but around it! LOL) and let you know how I did. There is just no reason for me to spend as much as I do on new scrapbook supplies… I have *thousands* of dollars already invested in product that's at my fingertips!

I am going to add 2 little exceptions: A couple sheets of KI Lace cardstock and Love, Elsie's Zoe line with the camera stuff… I'll still probably limit it to less than $10 though. I already have a couple of pics I'm saving for the Zoe line, and the Lace cardstock could *technically* fall under my “cardstock” exemption, but since it costs more than plain Bazzill, I'm mentioning it.

Anyone care to join me?