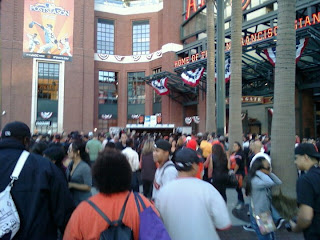 As I write this, we're still listening to and watching the post-game wrap up of the Giants incredible victory over the Atlanta Braves… just one more series (against the Philadelpha Phillies) between us and the World Series!

Jamie and I decided to be the impulsive types on Friday afternoon, and we took Max on on a grand baseball adventure, with a trip to the ball park! We didn't have tickets (or the $300 people were asking for a pair of bleacher seats!) but we decided that even just *being* there and absorbing some of the atmosphere was worth the effort… the Portwalk has some free viewing areas, so we decided to head over and check it out.

We started with Max's first boat ride, taking the ferry from Alameda to San Francisco. He did great, even when the boat had to cross some wake from another ferry, making it rock pretty dramatically… we resisted the urge to laugh at him trying to get his sea legs! As we sat there, he said “I love the boat! Let's go on a submarine!” I don't know where he got that, but we promised him a submarine ride when we go to Disneyland. 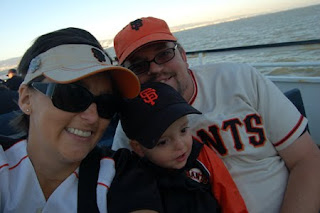 When we got to the park, it was absolute insanity! The fans are crazy, the 20+ person line to get into the Dugout store was crazy, the signs and costumes were crazy! It was fabulous, and we were already thinking that it was worth the trip. 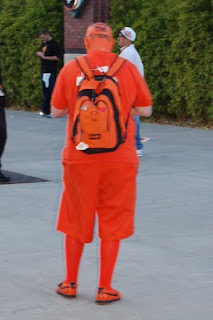 We noticed this cherry picker, all set to add “2010” to the wall mural; so cool! 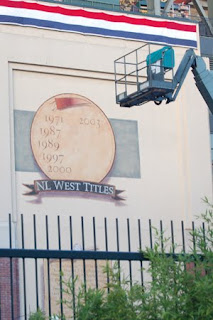 We asked a sweet couple to snap a pic for us at the park across McCovey Cove; they only spoke Spanish, but with lots of gesturing and laughing, we managed to explain our camera and they theirs, so we got a cute photo of the 3 of us. (But not as cute as this one, taken by one of the many roving photographers at the ball park… I adore this picture, and ordered a print of it, which I can't wait to get!) 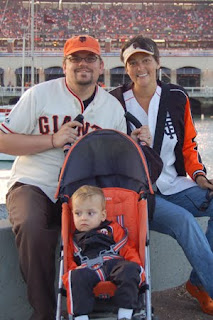 Wearing our rally caps, hoping that our Giants can pull it out… alas, we had to let the Braves have at least *one* win in the series, and unfortunately it was the game we were at. It's OK though, because we went on to beat them TWICE on their home turf! 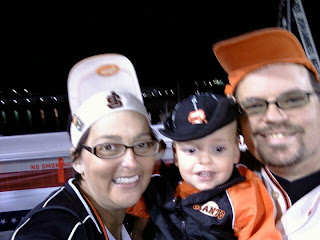 And this is another of one of those “not technically great but I love the image so much” photos… I can totally see this being an album cover for a Giants fan album… what songs would I put on there? Hmmm… the easy ones: “I Left My Heart in San Francisco” by Tony Bennett, “Don't Stop Believing” by Journey, ” “Bye Bye Baby” (the Giants fight song) of course, what else? What would *you* put on a baseball fan soundtrack? 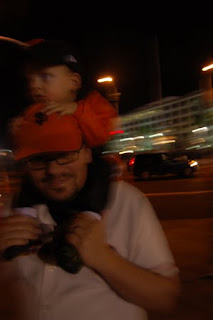 Speaking of songs, I am madly in love with this fan tribute… it makes me so proud to be a fan, and not one of those bandwagon “Ooh they're doing good this year!” kinds, but one who has been there for the crappy years too.

So now they're off to Philadelphia… should be a great series! One of their pitchers already threw the SECOND no-hitter in postseason history; but I don't know how they'll hold up against Timmy and The Beard!