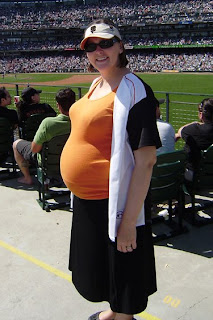 We took Spiff to his first baseball game yesterday, and the Giants did us the wonderful favor of actually WINNING!
We had fabulous seats from a friend, just one section over from the dugout, and far enough up that we were in the shade for the whole time. It was a gorgeous day, absolutely perfect for a ballgame.
The only flaw was the woman sitting behind us who (literally) talked then *entire* time about everything under the sun but the game going on in front of her. I managed to keep my mouth shut until she badmouthed (for the 2nd time) a woman and her 2 month-ish old baby, saying “What kind of parent would bring a baby to a baseball game?” So Jamie and I both turned around and said that we were!

Speaking of which, we're really excited… we've picked Spiff's first game. At the end of September, the Dodgers are in town on a weekend, so we're going to the Sunday game of the series. Katie and Jas are bringing Faith along as well, for her first game!
Faith will get to take a swing in the mini ballpark and we're hoping she'll be tall enough to go down the slide in the Coke bottle (as of her 18 month appt a few weeks ago, she's about 2″ short, so she should be all set!) and the coolest part is because it's a Sunday, kids get to run the bases after the game! Jamie's as thrilled as anyone, since we've spent many Sundays watching parents running the bases with babies in tow, and it's pretty stinking adorable! LOL 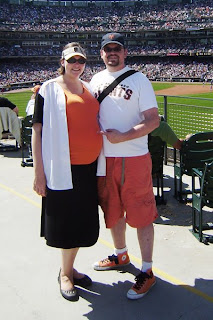 As for me, I'm hangin' in there! As you can see in the pic above, my feet and legs are swelling quite a bit, but I've been through that before, so no big surprises there. I can't believe it's 28 weeks already! He's super active all the time (he's certainly his father's son!) and just yesterday discovered bouncing on my bladder as a form of entertainment. (*sigh*)

That's it for now! I'm actually going to crop this Friday, which I haven't done since like November, so I'm totally ready to get my scrap on!

« Making room for baby!
This is it… the Mother of all Updates »