The best high school reunion movies are at 10 year reunions… namely Romy and Michelle's High School Reunion and Grosse Pointe Blank
So, regardless to say, I had pretty high hopes for my own 10th, which was this past weekend.
So we didn't have any shoot-outs or random choreographed dance routines, but I did have a fabulous time! 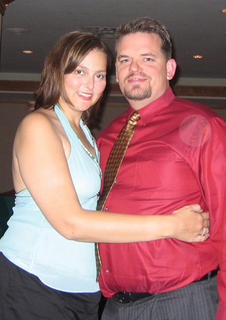 It's completely surreal, standing in a room full of people I've known for 15 years or longer, seeing pregnant bellies and balding heads (already?!?!) and seeing wine glasses and highballs instead of “Lone Star Beer” in cans (the drink of choice at high school parties in Danville, circa 1994)
I had a chance to chat with Melanie, who was in my kindergarten class at Twin Creeks, and I talked to “Jenner,” a guy we all knew as Aaron but who has since changed his name, gained a Scottish/Irish/British accent and now has several conspiracy theories he is looking to share with anyone who gets trapped in his path.
We rocked out to some of the best music of the mid-1990s (was there such a thing?) and lost count of how many times we answered “So, what are you doing these days?”
It really was a blast, and I can't believe that I was so nervous about going… the new outfit and the done up hair helped, I must admit…

So is it bad that I especially revelled in the homely girls who now look fabulous and the cheerleaders who don't? I found that guys are easier to recognize than girls, and that Botox is NOT a good idea at 27 or so…
Overall, I'm so happy I went, and would totally encourage others to go to their own… here's to the next one… 10 years down the road!